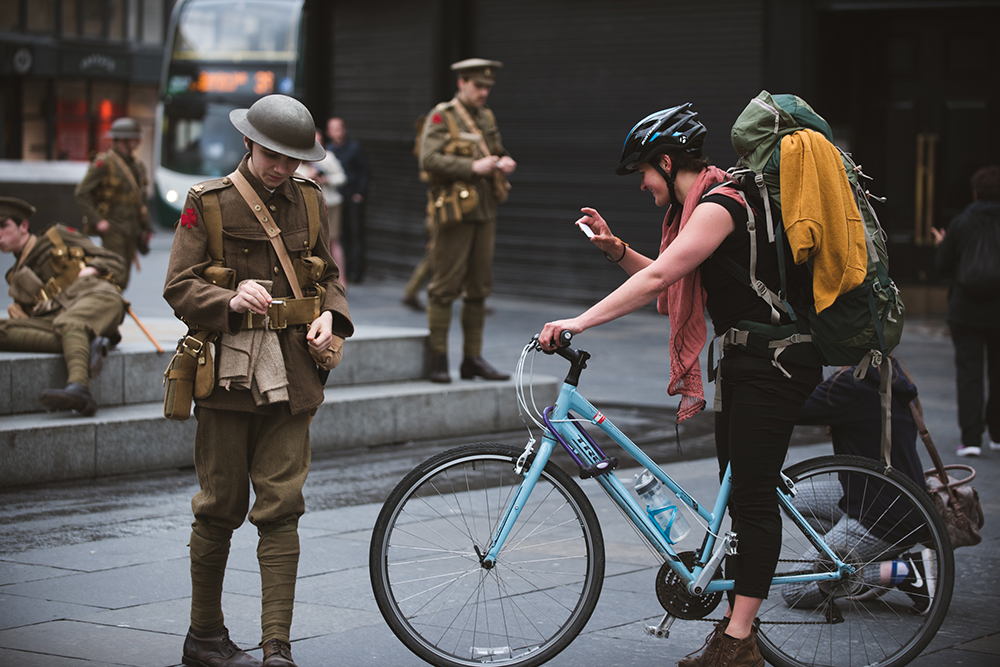 ‘we are here because we are here’ conceived and created by Turner Prize-winning artist Jeremy Deller in collaboration with Rufus Norris, photo by Topher McGrilli

we’re here because we’re here appeared for only 12 hours today.

On Friday 1 July 2016, thousands of volunteers took part in a UK-wide event as a modern memorial to mark the centenary of the Battle of the Somme, where 19,240 men were killed on the first day of the battle in 1916.

we’re here because we’re here was conceived and created by Turner Prize-winning artist Jeremy Deller in collaboration with Rufus Norris, Director of the National Theatre.

we’re here because we’re here, saw around 1400 voluntary participants dressed in First World War uniform appear unexpectedly in locations across the UK. Each participant represented an individual soldier who was killed on that day one hundred years before.

The volunteers were men aged between 16-52, reflecting the men who would have fought in the Somme. They were not trained actors but came from a range of professions, including a sheep farmer, flight attendant, doctor, lawyer, social worker, shop assistant, portrait artist and GCSE student. They came together to rehearse in theatres across the UK over a month-long period in the run-up to the performance.  ‘we’re here because we’re here’ is one of the largest arts participation projects ever staged in the UK, with hundreds of additional volunteers working behind the scenes.

Read more about the public response in the Independent, Evening Standard and Mirror