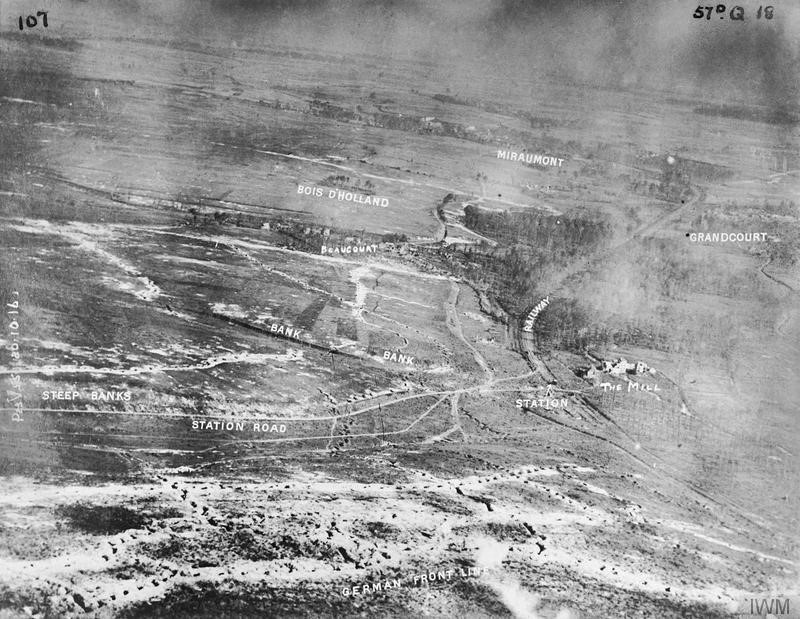 Low level annotated oblique view of the Ancre valley south of Beaumont Hamel, taken during the Battle of the Somme. Catalogue number Q 48887

This May outstanding international poets, filmmakers and visual artists will present their explorations of WW1 and its modern legacy at Norfolk & Norwich Festival. Fierce Light sees Daljit Nagra, Jackie Kay, Yrsa Daley-Ward, Bill Manhire and Paul Muldoon present live readings of their work plus an exhibition of excerpts from a series of specially commissioned short films at East Gallery, Norwich.

Simon Armitage’s new work Still is also part of Fierce Light. Still has been co-commissioned by 14-18 NOW and Norfolk & Norwich Festival and Writer’s Centre Norwich. Responding to six aerial photographs of cratered Somme battlefields, Armitage has penned a series of new poems which will be beautifully engraved on glass above the photographs and exhibited alongside the Fierce Light film exhibition at East Gallery, Norwich. The poems and images will also be published as a large-scale book by Enitharmon Press.

Watch Simon Armitage discuss the project or read about it in the Guardian & Daily Mail.

Read Simon’s live webchat on the Guardian here if you missed it.

The intention was to mimic the glass negatives of the original photographs and to allow, as far as possible, for a simultaneous ‘reading’ of both text and image (and) to encourage the poems to throw their word-shadows onto the landscapes below.
– Still, Introduction by Simon Armitage.