‘The tailored suit, jumpsuit, shorter hemlines, short hairstyle and trousers are all part of everyday wear in the 21st century, but their life began through the First World War.’

Without sounding dramatic, the idea for the project found me. The brief was about having fashion as part of the 14-18 NOW programme in some form or other. Fashion always seems to be the poor relation when it comes to the arts, a frivolous medium, concerned with money rather than creativity or social impact. My research into fashion through the early 1900’s and after the First World War showed the significant changes in the silhouette. Pre-War or Edwardian style, as elegant as it was, was restrictive in shape; boned-laced corsets, long hemlines, broad wide brimmed hats. Haute Couture was on the rise with the discerning eye focused on the style of Paris. For women, higher education, the right to work and vote seemed an eternity away, but the First World War changed all of this.

As most men left to go to war this gave women a window of opportunity and they grabbed it with great gusto. Through 1914-1918, the UK was run by women; bus and tram conductors, window cleaners, factory and munition and dock yard workers, stores and office clerks were all new jobs for women. With new roles came a new silhouette, the boned corset was abandoned and a softer silhouette took its place together with a stronger masculine style; jumpsuits, military wear, tailored suits and trousers. Fashion & Freedom will tell the story of the impact of the First World War on women and the political and social changes that happened. 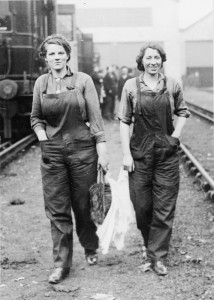 Female carriage cleaners on the London and South Western Railway, carrying their materials.

Which designers are showcasing works, and what have they taken as their inspiration?

I wanted to bring together, iconic, established and emerging female fashion designers together with graduates to create pieces inspired and influenced by the First World War. The changes that occurred in style still resonant in today’s fashion. The tailored suit, jumpsuit, shorter hemlines, short hairstyle and trousers are all part of everyday wear in the 21st century, but their life began in the First World War.

Fashion & Freedom is a contemporary exhibition with new pieces commissioned by our designers examining the significance of the First World War on fashion. I wanted each designer to discover their own story on the piece they created for the show and they have all exceeded my expectation. With so many stories to choose from we have looks created by women working in the factories, TNT poisoning, the outrageous exposure of knees, women in football, nurses on the frontline and even Jujitsu fighting Suffragettes, they are all a part of the Fashion & Freedom exhibition.

What is the meaning behind the theme of “Restriction and Release” that the students have worked to?

This exhibition is unique with established fashion designers, film makers, photographers in the same space and sitting alongside fashion students. I wanted the students to be as creative, experimental and crazy in creating their pieces.

I was fascinated by the extremes of a pre-War and post-War woman in both her physical movement and the challenges she had to face both socially and politically. The theme of Restriction is pre-War, a time when most women did not work, were fighting for their right to vote and had no political voice, there was a lack of higher education and opportunities that came with this. The government, police, media and general public did all they could to keep women down and prevent any changes. Women’s plight was reflected in their clothes too; boned-laced corsets, heavy skirts brushed to the floor, tight nipped in waists. Whether day or evening the style was uncomfortable with limited movement.

Now we move into a new era, Release marked a new period in style and culture. Women got the vote in 1918, over a 1.8 million more were in employment by the end of the War, together with a new attitude and confidence. The corset was shed, the bra was patented in 1914, shorter hems, softer silhouettes, short hair were all the rage plus more women had an interest in fashion, both in London, Paris and New York. 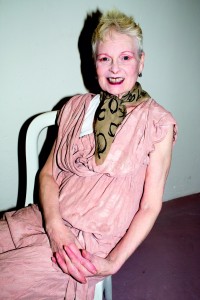 Fashion & Freedom is set to feature new creations by celebrity designers like Vivienne Westwood and Roksanda Ilincic alongside undergraduate students from leading fashion colleges around the UK. Why have you decided to involve students in this project and how were they picked?

I have worked with young designers for the past 12 years and discovered some incredible talent. To me, it’s important to give a young creative a platform so they can showcase their work and from the initial concept of Fashion & Freedom I was always going to include fashion students. We worked closely with five fashion colleges who took on the Restriction/Release project and made it part of their curriculum for the term. Together with the course leaders we picked two Restriction pieces and two Release pieces. I wanted to work with several fashion colleges from the North-West and London and so invited Manchester School of Art, Salford University, Leeds School of Art, University of Westminster and London College of Fashion (to join the project). Each college interrupted the Restriction/Release project in their own way but the result was the same with incredible pieces of work created. This is an exciting opportunity for the students and hopefully has made them think differently in terms of understanding a professional brief and the presentation of their work. I hope what they have learnt will carry on into their future career.

Can you tell us a bit about the pieces they have created and can you perhaps elude to some of your favourites?

I have already mentioned some of the stories and the themes of the pieces that have been commissioned by the both the fashion designers and the fashion students and excited and fascinated to see the reaction from the general public and media regarding the Fashion & Freedom exhibition. Most of us don’t know the actual story or the impact it had on both women and fashion so it will be interesting to see the impression it has, especially on young people and I am hoping that all who come to the exhibition will then do their own research and look at women in their family history and the service they gave to their country and the roles they took on during the First World War. I have huge admiration for these women and I hope it does the same for all visitors and gives them the motivation to vote after seeing the struggle women went through in gaining their emancipation.

Sorry no favourites, they are all incredible.

How does film feature in the exhibition?

Fashion & Freedom is about the movement of women, both in silhouette and its form and politically, so from the original concept I always wanted to present this through digital film. Fashion film plays an important role in the fashion industry today from catwalks, online streaming to major exhibitions and gives designers a new medium to explore. If I was going to work with film then it had to be with SHOWstudio, who have pioneered this medium. Founded and directed by Nick Knight, SHOWstudio is dedicated to working and collaborating with new, emerging creatives and exploring the diversity of fashion through the lens. We are very excited that SHOWstudio are creating three new films for the Fashion & Freedom exhibition and will be an incredible opportunity for the fans of SHOWstudio and a new audience to view their work.

Private White V.C. made the costumes for Luke Snellin’s film ‘still’ – what was the company’s story during the First World War and why was it important to you to work with them?

As well as the contemporary films of SHOWstudio I also wanted a more intimate film focusing on the story of a young girl as she prepares for her first day at work in 1916. It’s something we take for granted now, but 100 years ago a girl working would have been new and very profound. FIRST, directed by Luke Snellin, centres around Mary has she prepares for work as a bus conductor and the feelings and emotions she carries through her day, the pride she has and the thoughts and reflections of her brother at War.

All the uniforms for FIRST were created by Private White and based on the original silhouette of the bus conductor’s uniform of the time or Clippies as they were better known as. As well as Private White being Manchester based, the founder, Jack White, a First World War hero who won the Victoria Cross at the age of 18, founded the Cooper & Stollbrand factory where Private White clothes are made. Today the director of Private White is James Eden, the great Grandson of Jack White, with the creative director, Nick Ashely, the son of Laura Ashley. So with the history of the brand and with its roots firmly in Manchester it felt a right fit to collaborate with Private White and commission them for the film.

It is interesting to see significant historical events through a seemingly frivolous lens of fashion. Do you think fashion is something that is underestimated and should be taken more seriously by curators and audiences alike? What can we learn if we use fashion to look back at a particular era?

Yes I think fashion is seen as frivolous but that is more to do with the media than the general public. The media seem to have warped and fictitious view of fashion and can be dismissive of its impact from social commentary to its financial standing. Recent exhibitions have shown that the appetite for fashion is greater than it has ever been and shows like Bowie, McQueen and Chanel have only increased the fascination.

Fashion & Freedom will examine the relationship between the Women’s Movement of the time and significant changes in women’s fashion and how the two were so closely intertwined. The changes that occurred due to the new roles women took on transformed the female silhouette too. With fashion we can identify our history, pinpoint specific periods through style and silhouettes; the roaring twenties, the hedonistic sixties, the grungy 90’s, all instantly recognizable by fashion.

Yes I think fashion is underestimated but this is changing as more fashion exhibitions are launched, bringing new audiences and presenting (fashion) in new ways. Fashion curators are examining the medium through digital film, as works of art and collaborating with renowned film makers, photographers and artists. Fashion is a very serious business but there is something quite playful in how it is presented which I think the audience appreciate.