An Essay By Bonnie Greer 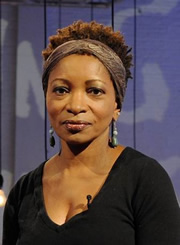 In around May 1918 Wilfred Owen drafted the preface for a collection of poems that he intended to publish the next year.

He was killed by a sniper’s bullet one week before the Armistice was signed, so the preface exists on its own, noble and solitary, one of the great edifices in that landscape of terror and pity we now call the First World War.

Artists are often assumed to ‘respond’ to an event, as if the event exists on its own and of itself.

But what if art actually contributes to creating the event itself, that part of it which fixes itself into consciousness? Is art then a kind of receptacle that lends meaning to events which could at first-hand be perceived as random and unrelated?

And as I watched a series of BBC interviews made in the sixties with a group of First World War veterans, I was struck by how each survivor had experienced the conflict.

They lived it in close-up.

For them the war was a succession of small moments of anguish and fear, hope and resilience. Even fifty years later, survival was still immediate, still close. They were there and they had survived, and this reality was as immediate, as visceral as if they had just come back from the front.

They may or may not have told their story to loved ones; or become Old Soldiers like the ones in the beautiful oration that Shakespeare gives to Henry V before Agincourt: ‘…But he’ll [the old soldier] remember with advantages/ What feats he did that day…’

It is more likely that the war was locked away. Buried, not transformed by the genius possessed of Owen into something more than an experience.

But it is the power of the film footage of these men, of the assemblage of images, the cutting and editing, the score, that makes a war that none of us experienced live within us. Be us.

Owen’s poetry became the muse for Benjamin Britten’s ‘War Requiem’, in which the pacifist composer set the poems to music which can only be called a cri de coeur.

We know the First World War from Benjamin Britten’s work, too. We live it through him.

In the 1980s the American band 10,000 Maniacs took Owens’ ‘Anthem For Doomed Youth’ – ‘Only the monstrous anger of the guns / Only the stuttering rifles’ rapid rattle / Can patter out their hasty orisons…’ – and turned it into a song, their own anthem for doomed youth. It was a lament about a new war, in a new time: ‘The stuttering rifles / … Kids dying like cattle … / The wailing of shells / And let those be forgiven / Who never owned a gun…’

In the same decade the film-maker Derek Jarman made his response to Britten’s setting of Owen’s poems. He too called his film ‘War Requiem’, and it featured the last performance of Laurence Olivier.

As with all of Jarman’s films – and this is his intention – you remember images. You remember the image of Olivier as the Old Soldier, wheeled out of the hospital by the nurse, his face full of remembering.

We remember him, and through him a war which we could not know becomes a part of us.

Art can create empathy – human feeling which enables us to understand and to create, for ourselves and in ourselves, that great event called the First World War.

Empathy – that portal through which we can place our own emotions, our own selves in the trenches; on the battlefields; in the hospitals; on the doorsteps; and inside the churches of those back home.

This is one of the domains of art.

Through empathy, we hold on to the past. We share it. We expand it.

But art is not solely about the painting, the film, the dance, the poem, the play, the song, the opera, the libretto or the novel.

Art is also about what is sometimes called the ‘trace’, that which is left behind, which expands our humanity – the “trace” which is often unnameable.

But sometimes an artist can grab the ‘trace’, hold it for a moment, name it.

In his preface to the book he never lived to publish, Wilfred Owen wrote:

‘My subject is War and the pity of War. The Poetry is in the pity.’

It is through art that we can hear the past, communicate with the present, reach out to the future. And perhaps make pity anew.