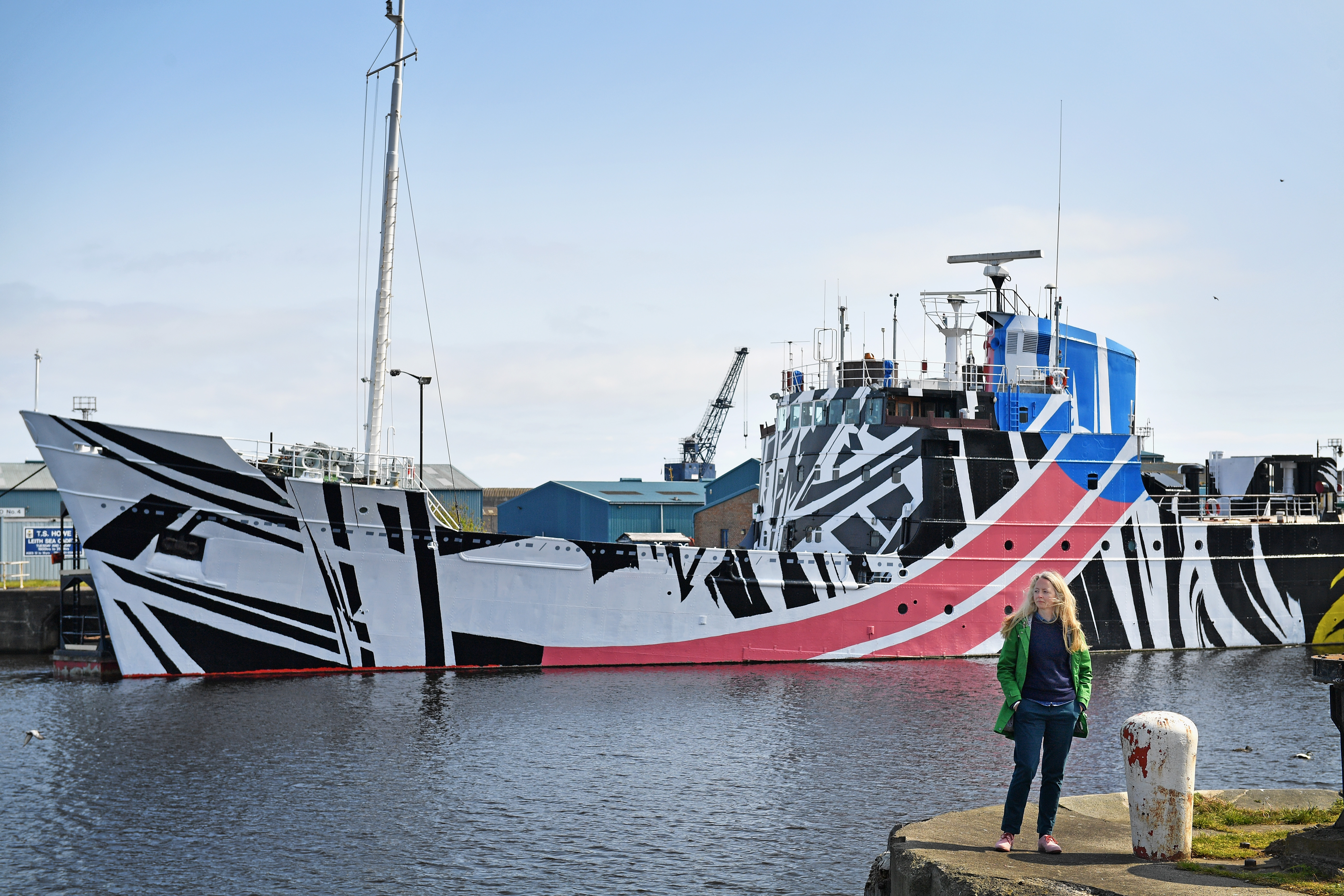 The ship is called Every Woman, what was it that drew you to explore the role of women in World War One – and how is the theme reflected in your work?

I knew about Dazzle ships already but when I started doing more research into them as a result of this commission I came across this great photograph of female art students at the Royal Academy working on small wooden models of Dazzle ships, so that made me think about the role of women artists in the creation of the originals and also about hidden histories of women more generally. That’s probably not the first thing you think of when you look at the imagery on the ship which is much more bold and much more graphic and that’s taken from one of my own screenprints but the message ‘Every Woman’ in the title of the ship and also in the text in morse code that runs on the front of the ship, comes from a longer phrase “every woman a signal tower” which comes from a book that was made in 1808 by a commander in the royal navy called James Spratt and he created a signalling system which was a precursor to semaphore where you could use your body as a signalling tower, your body and a handkerchief, he called that the Homograph Code and subtitled it ‘every man a signal tower’. And so for me there’s some nice connections between that, signalling and what the ship was used for originally which was as a lighthouse tender that went and looked after the northern lighthouses. So I guess there’s all these elements to it. The visual, the conceptual, relating to women and also thinking about the ship itself and it’s use and trying to bring all those things together.

Who was Olive Edis and how has she provided inspiration for your dazzle ship?

Yes, I came across her, I had never heard of her before, I came across her photographs when I was trying to find out more about women’s work and she had been stationed in France photographing women’s efforts there, it was just really interesting to see that she was (I think) commissioned by the Imperial War Museum as the first female photographer to be sent out as a war correspondent. So I was really interested in that and I’m happy if the project can draw out some of those stories and histories.

Us too! The revival and uncovering of women’s histories is an important dialogue in contemporary art and is also explored in our Fashion & Freedom commission.

Any challenges or positives that arose from working on such a large scale both artistically or practically?

It’s quite a feat to see this small flat drawing onto the surface of a very large awkwardly shaped ship! But it’s interesting to see that, working with the team of scenic painters – that’s what they do all they time, they translate things up – it’s been done  in quite a simple way just by referring to a drawing and drawing directly on to the surface of the ship and using string and masking tape and charcoal. It’s mostly been a team of female scenic painters which has been nice.

You often like to work collaboratively such as on Workshop which includes work from other artists and community groups. The dazzle ship project is a kind of dialogue with wartime dazzle artists, these new works are influenced by this functional art-form but for a different end. Was it important for you that the project allowed you to respond to an established form of pattern making and or is your Dazzle ship in dialogue with the existing artworks?

Conceptually as artists we come from somewhat different places but there is a kind of common thread maybe in the graphic approach to working that I think is consistent, or shared between the 4 dazzle ships. The design is something that I made myself but actually producing it has been extremely collaborative and that wasn’t something that I had really counted on, so, in some ways it’s almost like the biggest collaborative work that I’ve made and that’s been a really interesting part of the project that I didn’t necessarily anticipate.

What would you like people to take away from Dazzle Ship Scotland.

I hope it works on different levels. Some people may come by and they will hopefully enjoy the visual dynamic of the work and then that leads to finding out about a little more about Dazzle historically and for me it would be nice if some people then think further about the role of women so there’s different levels that people can engagewith it.  I would be really happy if it starts conversations about these histories, if it opens something up rather than presents the work as a kind of fait accompli.

Tell us a little  about your relationship to Glasgow, the city has a strong shipbuilding tradition.

I’ve been there for 14 years, it’s really where I’ve developed as an artist. It’s kind if an amazing city for art, things are very grassroots, there’s lot’s of possibilities of things to do there, it’s very challenging, people are working on a higher level thinking carefully about what they do. It’s been a very important part of where I am as an artist. I went there for two years and stayed for 14!