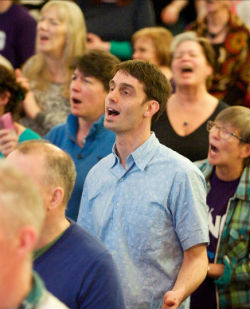 Is your choir interested in taking part in Memorial Ground? Fantastic. Here’s all the information you need to get started.

What is Memorial Ground?

Memorial Ground is a new piece of music commissioned to mark the centenary of the Battle of the Somme, and which is now offered as a commemoration for the those who sacrificed everything during World War I.

Written by Pulitzer Prize-winning composer David Lang, Memorial Ground received its world premiere at East Neuk Festival on 2 July 2016. The score and lots of helpful resources are now available on this website for choirs to download in order to create and sing their own versions of Memorial Ground unitl November 2018.

Who can take part?

Choirs of all types can take part. There are two versions of the piece, a short and longer version, to suit different ability levels and ambitions. There are plenty of options to make it work for you.

Want to hear a bit of the music? Watch this video:

Tell me more about the music.

Composer David Lang wanted to create a piece of music which enables us to remember and honour those who have made a great sacrifice so that we can live the lives we do, like those who died or were injured during the Battle of the Somme. Every choir that performs Memorial Ground can customise it by adding their own commemorative texts to the core piece. Want to know more about how that is done? Read some of  the different approaches people have already taken here.

Does it cost anything to take part?

No! The full Memorial Ground score and lyrics are free to download from this website. There are also lots of videos offering advice and guidance to help you prepare your performance, and audio tracks to help individual singers practice their parts. All we ask is that you let us know you are performing Memorial Ground by email or by registering your event here.

When and where does Memorial Ground happen?

You are welcome to sing Memorial Ground at any time and place during November 2016, though it is at its most powerful during Remembrance Weekend each year.

Who is organising Memorial Ground?

Memorial Ground is co-commissioned by 14-18 Now and East Neuk Festival with the support of Creative Scotland.

Here is composer David Lang talking about what inspired him to write the piece:

Here is the project’s Director, Svend Brown, explaining what gave him the original idea:

Memorial Ground has one unique aspect to it that we’d like to tell you about in some detail: it is a piece that can be customised for every performance so that its texts are especially meaningful and relevant to the place and people involved in the performance.

Part 1: this is the ‘ground’ of the title. A ‘ground’ is a repeated bit of music over which you can add more music or improvise. For example the chord sequence that is repeated over and over again at the end of Hey Jude is a ground. Pachelbel’s Canon is a ground. David Lang has written the music and words for this and he has made a 2-minute and a 5-minute version so that choirs can choose which one they prefer to work with.

Part 2: After the ground has been sung once through, David wants every choir to use short melodies (which he will provide) to set texts of their own choosing. In this way each choir can make the piece specifically about them, where they live and perform, and any World War One history that is special to them. Or they can simply choose a text that means a lot to them – like a poem. The melodies all last a few bars so suit pithy, vivid texts extremely well, but they can also be combined to set longer texts. It is also possible for texts to be spoken over the ground.

Here are some of the ideas that people brought to their own performances of Memorial Ground in 2016:

Adults have written solos relating to their own experiences, and the children’s solos are based on facts about young Walworth men who signed up, sometimes illegally under age, and lost their lives.
Pembroke House Community Choir

Our wonderful reader read a roll call of local and choir connected names, with little bits of ‘history’. We sang the 2-minute piece 4 times, – one as hymn and three with words interspersed. A very moving experience to all of us present.
Staveley Choral Society

We received many great comments about Memorial Ground, particularly the solos. The texts were written by the singers themselves – about grandfathers, great grandfathers and great uncles… we also sang the lists of the fallen from Lydney, Chepstow and Usk Cenotaphs.
The Singing Club

There was a sense afterwards that the audience felt it inappropriate to applaud, so we walked off in silence, and then the applause started once we’d left, so we had to come back on! But it created the right sombre mood for reflection, and a member of staff loaned us an original period phonograph playing original LPs as the audience entered the gallery – it was quite something to hear the very equipment that would have been used in the trenches playing before the performance.
Cecilian Choir

We are doing a 5-minute version with violin and cello and tubular bells and soprano and tenor solos. We are using David Lang’s words for the solos together with personalised references suggested by choir members.
Caroline Hyslop, Lawford Arts Singers

We’re using the RBL prayers (thank you Frikki Walker it is a great idea) and pairing it with Bob Chilcott’s Irish Blessing.
Great Oakley Choir

We’re using the hymn as intercession, with 12 different students reading a litany for peace in different languages between the sung chants to reflect our multicultural world.
Blundell’s School Choir

We are performing the two-minute version of the piece, with three soloists singing excerpts from prayers and poetry to reflect remembrance and our concert theme of ‘light’.
Finchley Chamber Choir

We are playing improvised piano to accompany the vocal sections, while a young boy from our Men’s choir in between each of the choral bars will announce a man’s name and some information about him. The names given are the men from our town (Carrickfergus) that died on the first day of the Battle of the Somme, which we feel makes the piece special to our community.
Carrickfergus Grammar School Senior Choir

At the moment the whole class is singing the soprano line for the 2 minute version of the piece. We will be adding tuned percussion for the chimes at the beginning of each phrase. Many of the children are keen to do some research into local and/or family history to see whether they can come up with any names or information that they can include. One pupil has had the idea to whisper the names of people who died, after singing “those who have gone before us” which is just the kind of thing I was hoping they would want to do. I’m pleased that the class have had their imaginations sparked by this piece.
Duniplace Primary School

We’ll remember the lives of #LGBT people during WWI.
The Fourth Choir

The Fourth Choir also memoralised relatives: ‘Great-uncle Stan who fought at the Somme with his friend Billy; Stan lost his hearing, Billy lost his life’ ‘a great-aunt who married her fiancé just before he left for France; he never returned and she never re-married.

On Tuesday evening Aberdeen Gaelic Choir was proud to present Memorial Ground, an act of remembrance, principally to commemorate the centenary of The Battle of the Somme, but also to reflect on conflict in general, up to and including present-day unrest which we sadly see daily on our television news broadcasts. The presentation opened with Malcolm’s piping, appropriately ‘The Battle of the Somme’, and consisted of music and words, sung and read by the choir and choir members, culminating in the performance of Memorial Ground. The performance was accompanied by a presentation of now-familiar images of the Great War, which only lent itself to the poignancy of the music and testimonies of the war poets whose words we heard.
Aberdeen Gaelic Choir