Esther Freud trained as an actress before writing her first novel Hideous Kinky, published in 1992. Hideous Kinky was shortlisted for the John Llewellyn Rhys Prize and was made into a film starring Kate Winslet. She has since written seven other novels, including The Sea House, Love Falls and Lucky Break. She also writes stories, articles and travel pieces for newspapers and magazines, and teaches creative writing at the Faber Academy. Her most recent book, Mr Mac and Me, will be published in September 2014. She lives in London with her husband and three children. 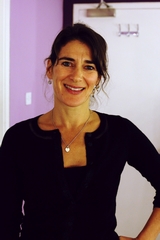 It is the summer of 1914 and my great uncle,  a young  man of nineteen,  a Jew, and a patriotic German citizen, is preparing to go to war.  Just like you, he is anxious and excited. He’s the oldest child in the family, the only boy, and he’s  ready to get away from the cloying attention of his mother and three sisters.  He doesn’t know it  but it won’t be long before he’s  sent to North Africa, where he is captured and held as a prisoner of war. Or that on his release he  moves to Palestine where he will convert to Christianity and in a  tragic moment  of mistaken identity will be shot and killed as an Arab. He doesn’t know yet either that  the youngest of his sisters will volunteer as a nurse, and while working in a field hospital outside Berlin, will meet and fall in love with an Austrian soldier, the son of the renowned but not entirely respectable Herr Professor Freud.  They  marry, and later, with their three  sons,  move to England where they are among the last people to be naturalized before the start of the next war.  These at least are the stories that have come down to me. Although there are  many more – money hidden in table legs, houses lost, houses re-claimed, men running off to America, Hong Kong – just as there must be in your own family.

What is your story?  Where did you come from, and where did you end up?  What were your last words, your  thoughts and prayers?  You may be surprised to know that   a hundred years after you first went into battle,  the people of this country  still talk about  you. They have passed on the waste and wonder of your sacrifice, so that  each new person can examine it, own it as part of  their own story, before handing   it on.