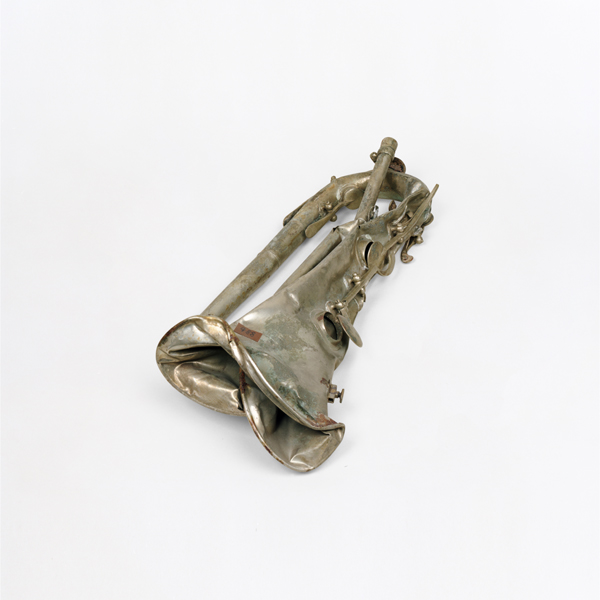 For all its mournful aspects, the music is as uplifting as it is painful; close then distant, clear then broken, a cry then a whisper. The sound is wonderful.

War has always been accompanied by music. Drums, bugles, fifes and trumpets have marched generations of men and women into battle, and brought them together at its end. For this new commission, Turner Prize-winning artist Susan Philipsz brought to life a selection of instruments disfigured by conflict: warped by explosions, riddled by bullets, crushed under rubble.

Each wounded instrument played a single note from ‘The Last Post’, a refrain that was sounded to mark the completion of an officer’s evening checks and that now serves as a memorial to those lost in conflict. The damage inflicted upon the instruments by war bended the tune out of shape and created a moving symphony of injured sound that rang out from speakers hung through the Duveen Galleries at Tate Britain; parts of which operated as the Queen Alexandra Military Hospital during the war. Walking through the central section, visitors heard a group of instruments used during the First World War: a tuba from the German trenches and a cavalry trumpet retrieved from a ship torpedoed by a submarine in 1918.

Described by The Guardian as creating ‘music [which] is as uplifting as it is painful’, these ravaged notes were coaxed from their instruments by musicians from Britain and Germany. Developed over a number of years by sound artist Susan Philipsz, this presentation used the power of music to connect us to the physical suffering of war.

Commissioned by 14-18 NOW and Curated by Tate Britain.

For all its mournful aspects, the music is as uplifting as it is painful; close then distant, clear then broken, a cry then a whisper. The sound is wonderful.