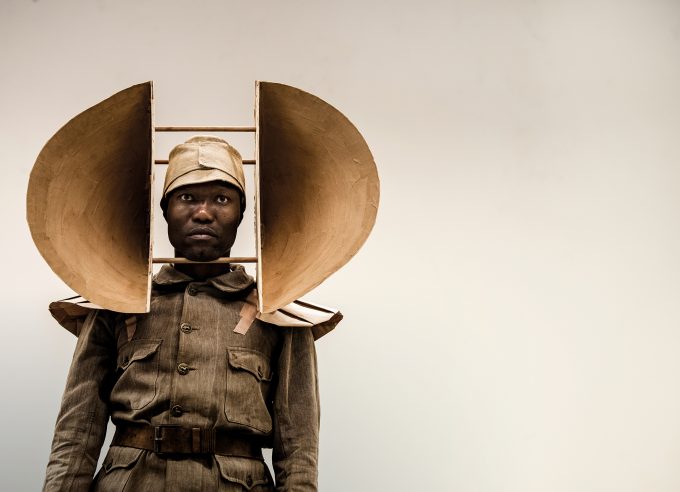 The Head & the Load

The Head & the Load combined music, dance, film projections, mechanised sculptures and shadow play to tell the story of the millions of African porters and carriers who were involved in the First World War. The world premiere of this major new work was staged in Tate Modern’s Turbine Hall.

William Kentridge is a remarkably versatile artist whose evocative vision combines the political with the poetic. Dealing with subjects as sobering as colonialism and totalitarianism, his highly personal work is often imbued with lyrical undertones and references to his native South Africa. Taking its title from the Ghanaian proverb, ‘the head and the load are the troubles of the neck,’ Kentridge’s most ambitious project to date drew on every aspect of his practice: drawing, printmaking, painting, sculpting, performance and filmmaking. Working alongside his longtime collaborator Philip Miller, one of South Africa’s leading composers, this celebrated artist created a stunning audiovisual monument to those who died for a cause that was not their own.

The musical journey, as much an installation as a performance piece, combined performances by orchestra collective The Knights with an international cast of singers, dancers and performers, many of whom are based in South Africa. They were accompanied by a chorus of mechanised gramophones, projections and shadow play to create an extraordinary imaginative landscape on an epic scale.

World premiere in London at Tate Modern produced by THE OFFICE performing arts + film in association with Quaternaire with support from the Naomi Milgrom Foundation. 14-18 NOW is supported by the National Lottery through Heritage Lottery Fund and Arts Council England, and by the Department for Digital Culture, Media & Sport.

Lead support for the development of The Head & the Load was provided by Brenda R. Potter, Daniel R. Lewis, the W.L.S. Spencer Foundation and Jennifer & Jonathan Allan Soros, with further support from Alessia Bulgari and Agnes Gund. Additional support was provided by the JKW Foundation, The Andrew W. Mellon Foundation, Wendy Fisher and those donors who wish to remain anonymous, and Simeon Bruner, Sarah McNair and Randal Fippinger, John and Cynthia Reed, Christian and Anna-Louise Rode and Quaternaire.

Performed and created by

“cleverness to a truly sublime level, where the mind was constantly entranced, just as the body was engaged in uproarious physicality.” – The Telegraph

“an electrifying collage of imagery and ideas” – The Independent

“extraordinary elegance and emotional and visceral power” – The Evening Standard