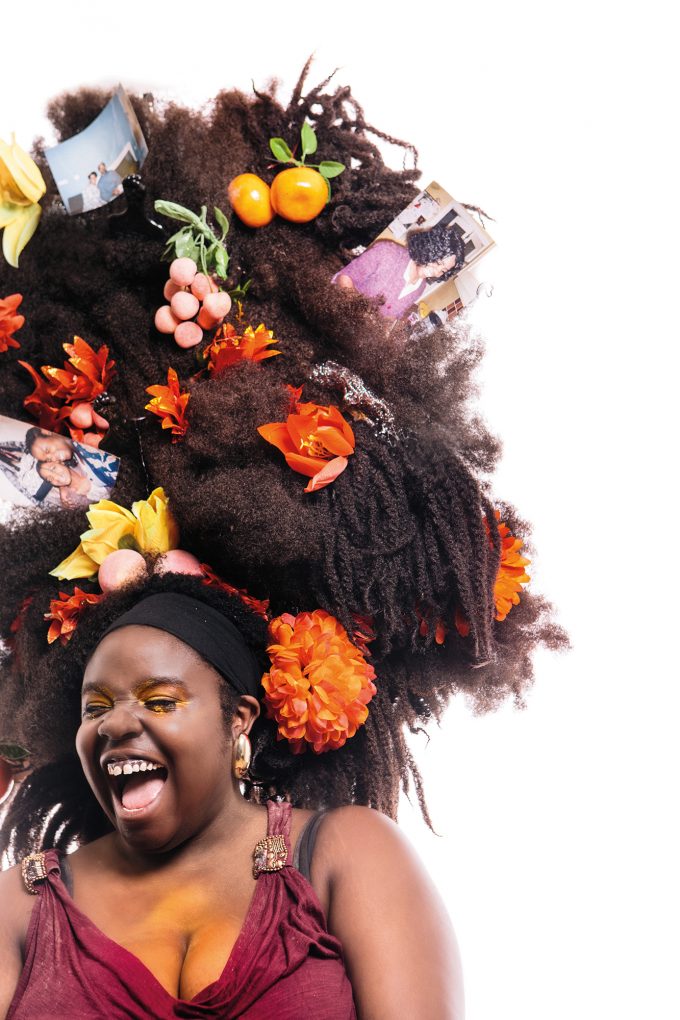 Under the terms of the Representation of the People Act, which received the Royal Assent on 6 February 1918, some 8.4 million women were for the first time granted the right to vote in parliamentary elections. This was the culmination of a hard-fought campaign that had begun tentatively in 1866, had continued with gathering determination through the remainder of the 19th century, and, as conducted by one faction, reached a crescendo of violence immediately before the outbreak of war in 1914.

For between 1903 and 1914 the campaign had been conducted on two fronts. The National Union of Women’s Suffrage Societies continued with a purely ‘constitutional’ campaign, lobbying politicians to persuade them to present women’s suffrage bills in Parliament, while the ‘militant’ Women’s Social and Political Union attempted to coerce the government into giving women the vote by a campaign that began with the heckling of politicians and ended with bombing and arson.

Although on the outbreak of war in August 1914 both factions ceased active campaigning in order to devote themselves to the war effort, the constitutional organisations ensured that the subject of women’s enfranchisement was brought to the attention of the Speaker’s Conference, convened in 1916 to consider the compilation of a new electoral register. The fact that women were actively supporting the war effort, both in the munitions factories at home, and as nurses and doctors in the war zones, was much discussed in the ensuing parliamentary debates. This had the effect of allowing politicians who before the war had opposed the enfranchisement of women, to alter their position, citing their war work as proof of women’s fitness for citizenship.

Even so, the measure of enfranchisement granted to women under the 1918 Act fell short of complete equality with men. All men could now vote in parliamentary elections once they were twenty-one, while women had to be over thirty and had to fulfil a property qualification. That is, either she or her husband (if she had one) had to occupy a house, or land or premises valued at no less than £5. This was not an onerous qualification but was one that did disenfranchise about twenty-two per cent of women who were eligible by age. As Lilian Lenton, formerly a very active member of the Women’s Social and Political Union, ruefully commented, ‘Personally I didn’t vote for a very long time, because I hadn’t either a husband or furniture, although I was over 30’. The lack of ‘furniture’ referred to the fact that her low income obliged her to live in a low-rent furnished room.

In addition, women over the age of 30 who had graduated from a university were entitled to vote in their university constituency. This applied even to Oxford and Cambridge, which at this time still refused to award women degrees.

The age restriction imposed on women voters was somewhat undermined by the passing, in November 1918, of the Parliament (Qualification of Women) Act, which allowed women to stand for election as MPs on the same terms as men. This meant that a woman could become an MP when she was 21 years old, while still unable to vote. The anomaly was finally abolished in 1928 when the Equal Franchise Act finally gave women the parliamentary vote on the same terms as it was given to men. 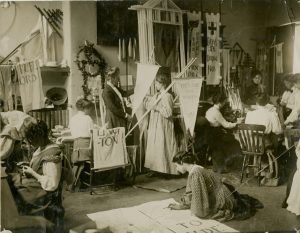 Making banners for a Women’s Social & Political Union (WSPU) rally, 1910. A group of women in a workroom designing and making WSPU banners for the procession of 23 July 1910; commentary on printing by World’s Graphic Press was: “Next Saturday’s Mammoth Procession of the Suffragettes will be a pageant in itself. The preparations are on a vast scale and the banners and floral decorations carried by the Processionists promise to be of a most striking and picturesque nature. Our picture shows members making final preparations.” 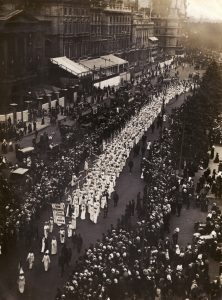 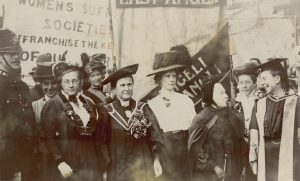