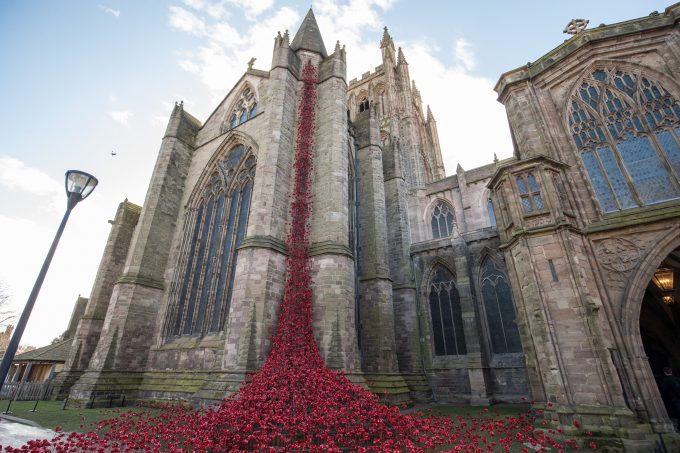 The men and women of Herefordshire made a huge contribution to the war effort during the First World War in a variety of ways. Young men were recruited into the Herefordshire Regiment, which expanded to three battalions during this time, landing in Suvla Bay in Gallipoli in August 1915 before being transferred to the Western Front in 1918. Shells were produced at the Rotherwas Munitions Factory, which saw an influx of thousands of women into the county. Shell filling began on 11 November 1916. Herefordshire also provided horses for the front, known as ‘remounts’, as well as providing food supplies for the nation and the front from farms across the rural county.

Hereford Cathedral dates from 1120 and is renowned for being the home of the Mappa Mundi, 1217 Magna Carta and a unique Chained Library. First World War memorials in the cathedral include a plaque commemorating men of all ranks of the Herefordshire Regiment who died on campaigns in Egypt, Gallipoli, Palestine and France, and one to Hereford Cathedral School students and staff, including four former choristers. A Book of Remembrance for the husbands and sons of members of the Hereford Mothers’ Union who gave their lives in the war is on permanent display. In 2018, Hereford Cathedral will unveil a new plaque honouring soldier Allan Leonard Lewis, the only Herefordshire-born recipient of the Victoria Cross. Lewis was killed in September 1918, aged 23.The Victoria Cross was presented to his parents by H.M King George V at Buckingham Palace in April 1919.