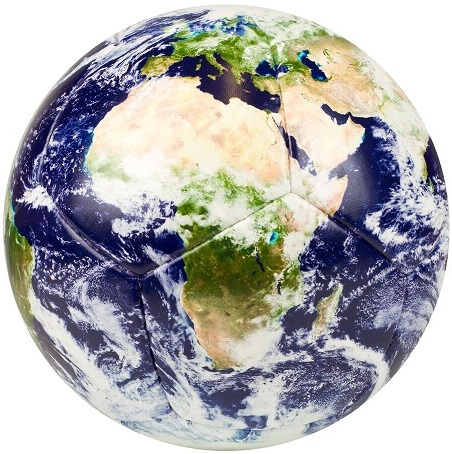 One World was a commission by internationally acclaimed artist, Mark Wallinger marking the centenary of the First World War through football.

Inspired by the famous Christmas truce of 1914, when soldiers from both sides emerged from the trenches and met in No Man’s Land to exchange gifts and play football, Wallinger took the football itself as his canvas. He transformed the football into a globe of the world, taking inspiration from the celebrated image of the Earth taken during the Apollo 8 lunar orbit on 24 December 1968. Captured at the moment of earthrise, it is an image of enduring beauty, depicting a peaceful planet floating in the vastness of space.

In partnership with organisations including the EFL Trust, Sport England, the Football Foundation, Sport Northern Ireland and sportscotland, a limited edition of the One World football was released in November 2018 to community football projects across the UK, with the simple request to each person to upload their own #OneWorld video in response to Wallinger’s call to action.

Mark Wallinger said: “It is 100 years since the Armistice was agreed in 1918, and 50 years since the Earthrise photograph was taken on Christmas Eve 1968. One World is my contribution to the legacy of those precious moments – spreading a message of peace for the world. Time to stop fighting and start playing. Playing the beautiful game. Let’s take that image of a precious and fragile world into the future and celebrate the joy of playing together.”

Leading contemporary artist, Bob and Roberta Smith, invites students nationwide to make new work in response to the bold provocation, what does peace mean to you?