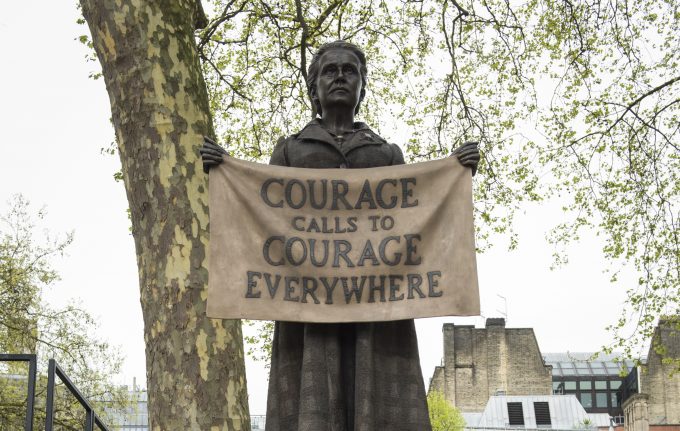 Millicent Garrett was born in 1847 in Aldeburgh. From the age of 19 she campaigned tirelessly for women’s right to vote. In 1866 she collected signatures on a petition which she was too young to sign herself. She then joined the executive committee of the London Society for Women’s Suffrage in 1867 and in the same year was present in parliament to witness John Stuart Mill’s amendment to the Reform Bill which was defeated.

She spoke at the first public suffrage meeting held in London on 17th July 1869, the first of countless public meetings and rallies. In the 1870s she became well known as a speaker and lecturer when women rarely ventured on to public platforms. She did the necessary and often dull work: lobbying MPs, writing letters and pamphlets, organising delegations, and chairing committees. She also achieved the extraordinary feat of organising a pilgrimage of 70,000 people from all around Britain to march into Hyde Park in July 1913. For many years Millicent campaigned across all the main political parties and remained politically neutral until in 1912, frustrated with the lack of progress from the Liberal government, she switched and supported the Labour Party.

At the age of 20 Millicent married Henry Fawcett, a Liberal MP who supported the suffrage campaign. Henry was blind and so Millicent became his assistant, helping him with his correspondence and speeches in parliament.

As a suffragist Millicent Fawcett was a constitutional campaigner for the vote. She believed in using only peaceful methods. The Suffragettes used more militant tactics. However, Millicent saw the value of securing more attention for the campaign and at first she supported them. She raised money for Suffragettes who were imprisoned and spoke of their courage. Many NUWSS members were also members of the WSPU. But as the campaign progressed she believed that the Suffragettes’ tactics became counter-productive and distanced herself from them.

“Had there been no militancy and no war the emancipation of women would still have come, although more slowly. But without the faithful preparation of the ground over many years by Dame Millicent Fawcett and her colleagues, neither militancy nor the war would have produced the crop” — Manchester Guardian 7th August 1929, Millicent Fawcett Obituary

The First World War proved to be pivotal. The Suffragettes disbanded their campaign and instead threw themselves into the war effort and never resumed their activity. But Millicent stuck with it. In March 1917 she led a deputation of representatives of 24 women’s suffrage societies & ten other organisations to the new prime minister, Lloyd George. She was present on 10th January 1918 to witness the debate in the House of Lords that resulted in a majority for the women’s suffrage clause to the Representation of the People Bill. On the 6th February of that year, the Bill became law. She was also present in the Ladies’ Gallery in parliament in 1928 to witness the granting of universal suffrage on equal terms with men. On its passing, she spoke of her “thankful heart”, understating her contribution, noting her “extraordinary good luck in having seen the struggle from the beginning.” She died a year later in 1929.

Millicent campaigned for women’s rights in education, work and more, but she saw the right to vote as the key to transforming women’s lives. In 1871 she co-founded Newnham Hall, later Newnham College, Cambridge, and she supported Emily Davies’s 1887 bid to open Cambridge degrees to women. She was also particularly focussed on the rights of working women. In 1874 she was one of the original trustees of the National Union of Working Women, and in 1881 joined
the council of Emma Paterson’s Women’s Protective and Provident League. She campaigned against child labour and child sexual abuse, and was involved in the criminalisation of incest. She campaigned against the practice of excluding women from courtrooms when sexual offences were under consideration, and campaigned against child marriage in India. She also campaigned to open the legal profession and civil service to women, for equal access for women to divorce, and she was a supporter of Josephine Butler’s campaign against the Contagious Diseases Act (where female prostitutes were subject to venereal disease tests & liable to imprisonment, but their male clients were not tested).

After the vote was won the suffrage movement then began to focus on improving women’s lives. Millicent knew that the key to achieving this and securing the survival of the movement was mobilising and engaging young people, and young women in particular, so she created the Junior Council.