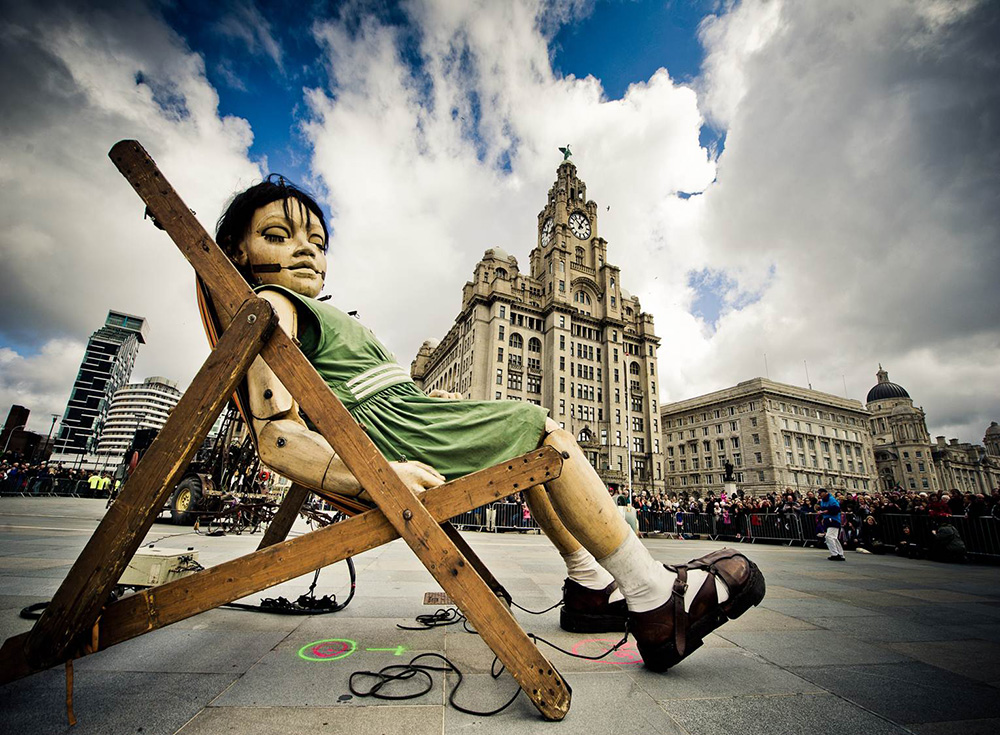 At the outbreak of war in August 1914 Britain’s military leaders were acutely aware that the professional British Army was dwarfed in size by the conscripted German Army. The British Expeditionary Force sent to France was made up of 100,000 men. Germany mobilised 1.7 million men to fight in France and Belgium.

As Secretary of State for War, Lord Kitchener launched a recruitment campaign looking initially for 100,000 volunteers to join the forces. This campaign appealed to the sense of duty and patriotism of the country’s men.

In Liverpool, Lord Derby was granted permission by Kitchener to raise a battalion (1,050 men) from the business houses of Liverpool. Following appeals in the press he called a meeting at which he delivered an emotive speech in which he coined the term ‘Pals battalions’: ‘This should be a battalion of pals, a battalion in which friends from the same office will fight shoulder to shoulder for the honour of Britain and the credit of Liverpool.’

So overwhelming was the response that between 31 August and 5 September enough men signed up at St George’s Hall to form three battalions. By November 1914 this had increased to four and these would become the 17th, 18th, 19th, and 20th Battalions of the King’s (Liverpool Regiment). Towns and cities across the country formed Pals battalions in which the men might share a profession (Glasgow Tramways Battalion), an ethnic background (Tyneside Irish Battalion), or even a shared sport (the footballers’ battalion, also known as the 17th Battalion, Middlesex Regiment).

The Liverpool Pals saw action for the first time at the Battle of the Somme. On the opening day of the battle on 1 July 1916, nearly 20,000 British and Commonwealth soldiers were killed and a further 40,000 wounded or missing. The Liverpool Pals succeeded in taking their objectives, near the village of Montauban, but at a cost of over 250 men. On 30 July, at Guillemont, over 460 men were killed in a single day. They would go on to serve with distinction in other major battles such as Arras and Passchendaele. By the end of the war over 2,800 had given their lives.

A memorial to the men who served with the Liverpool Pals is to be unveiled at Lime Street station on 31 August 2014. 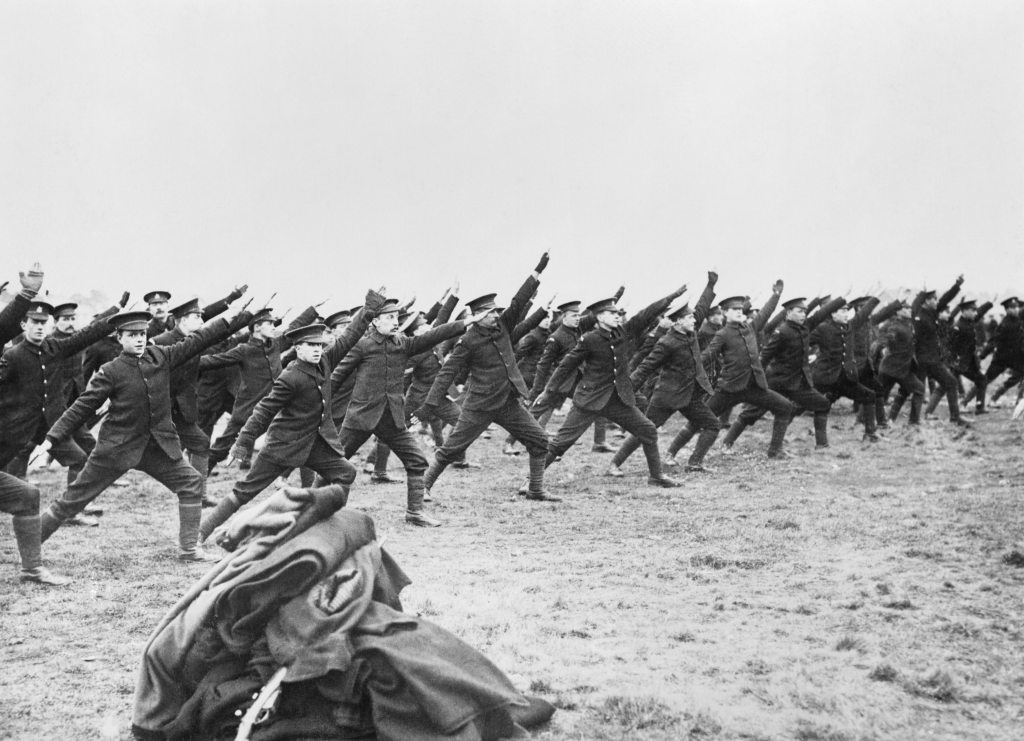 BRITISH RESPONSE TO THE OUTBREAK OF WAR AUGUST 1914: RECRUITING AND SCENES IN THE UNITED KINGDOM. The Forces at Home: Men of Kitchener’s Army doing physical training exercises at Branksome near Bournemouth. A tremendous response followed the initial call for volunteers from the Secretary of State for War, Field Marshal Lord Kitchener. All men are lunging to the left with their arms outstretched. 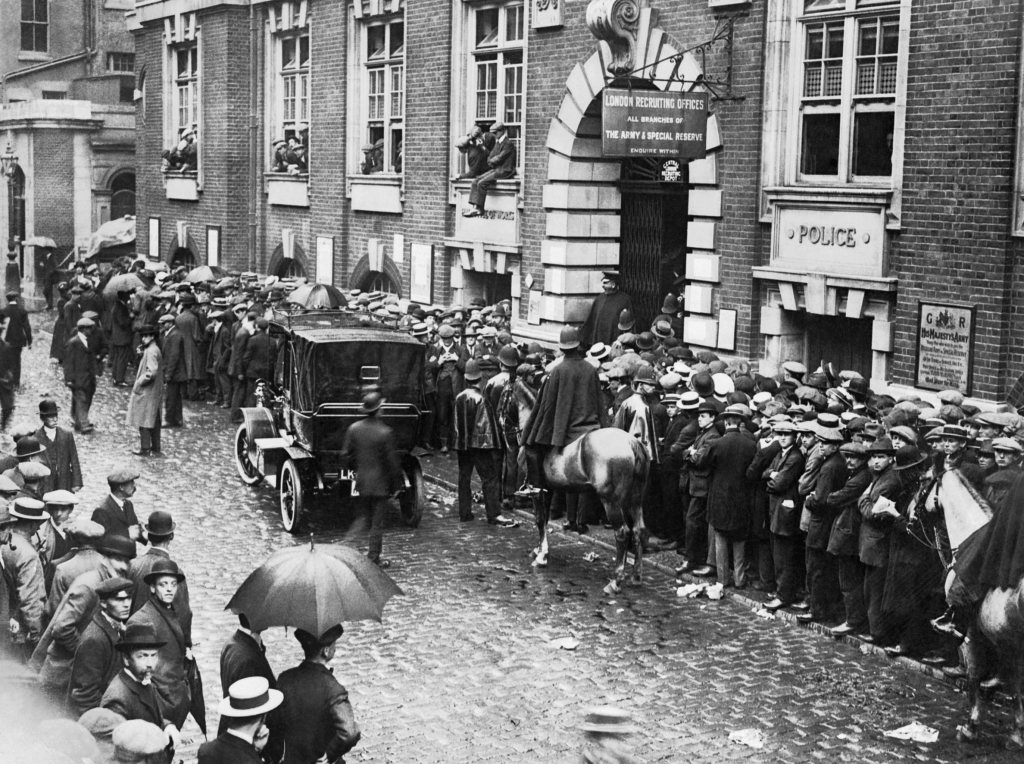 BRITISH RESPONSE TO THE OUTBREAK OF WAR AUGUST 1914: RECRUITING AND SCENES IN THE UNITED KINGDOM. Recruits at the Whitehall Recruiting Office, London. Britain’s declaration of war on Germany on 4 August 1914 was greeted for the most part with popular enthusiasm, and resulted in a rush of men to enlist. 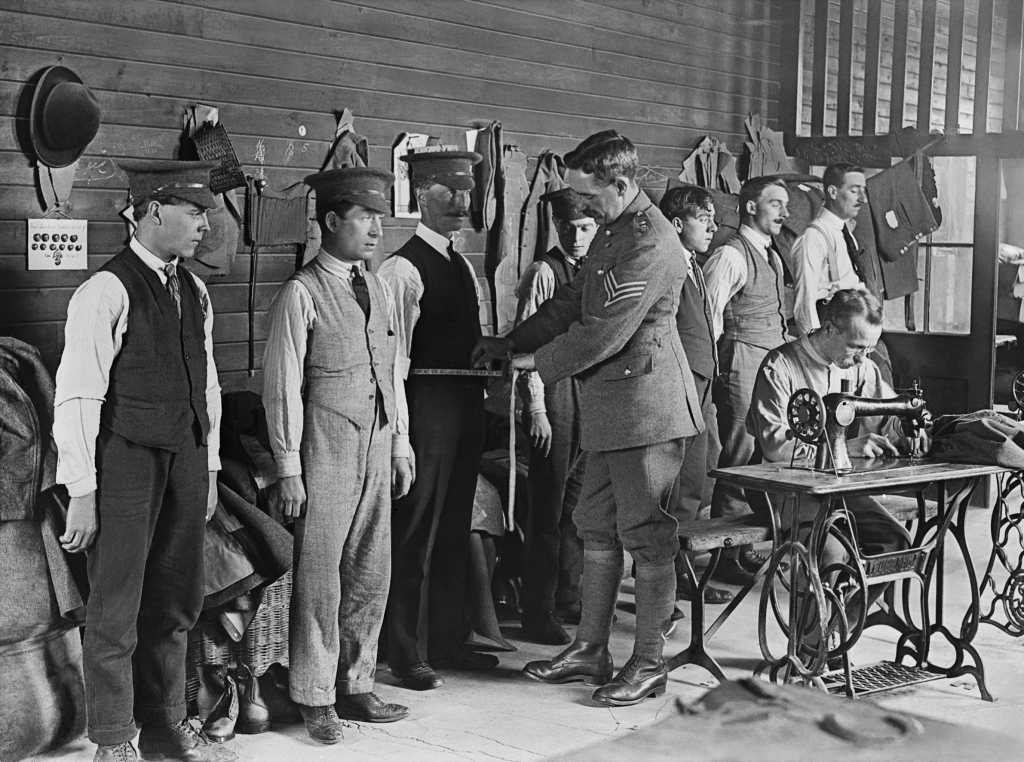 RECRUITMENT AND ENLISTMENT DURING THE FIRST WORLD WAR (1917)
After enlistment, an army sergeant measures one of a line of new recruits, still in civilian dress, for uniform and kit. Some of the recruits are already wearing army caps. In the foreground, a man sits at a sewing machine, ready to make any adjustments to the uniforms. By Nicholls Horace 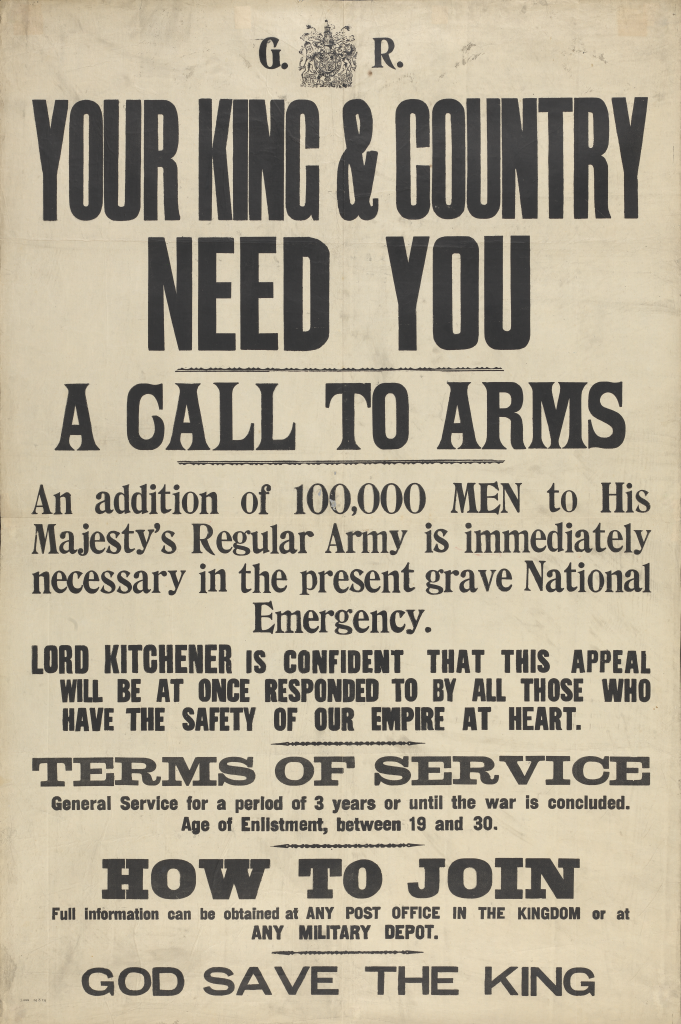 Your King and Country Need You – A Call to Arms

To find out more about the Pals battalion and the history of army recruitment in WW1 browse our list of links to other resources:-

1. From the Imperial War Museum, an article on the Pals Battalions.

2. An exploration on propaganda in the war, from the National Archive:  Britain and the War: ‘Your Country Needs You’

3. Dr Alex Watson from the British Library looks at Recruitment: conscripts and volunteers during World War One

4. An article on Lord Kitchener and Great Britain’s Volunteer Army

5.  The BBC present an exploration of the war pre-conscription in The Pals Battalions in World War One

6. A run down of The King’s (Liverpool) Regiment

8. A Short History of the Liverpool Pals

9.  A look at Lord Derby and A Regiment of Pals 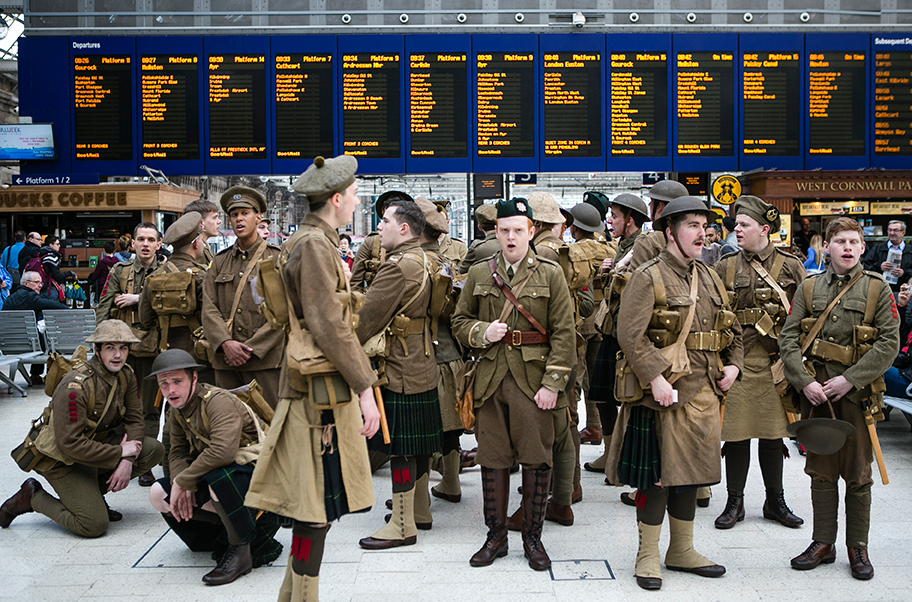 More than 1,400 volunteers dressed in wartime uniform appeared unannounced across the UK for this extraordinary living memorial to the Battle of the Somme.