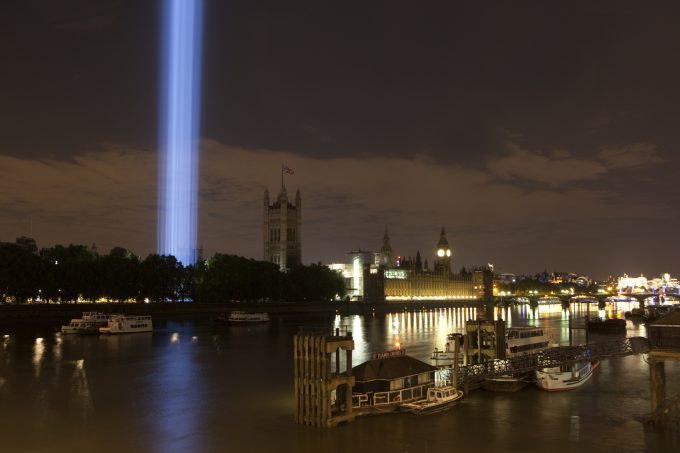 The lamps are going out all over Europe; we shall not see them lit again in our lifetime

On 4 August 2014, the people of the United Kingdom were invited to participate in LIGHTS OUT by turning off their lights from 10pm to 11pm, leaving on a single light or candle for a shared moment of reflection.

More than 16 million people around the country marked the centenary of the outbreak of the First World War, whether in the privacy of their own homes or at one of the many communal events to take place across the nation. Over 1,000 local authorities, iconic buildings, national organisations, including the BBC and the Royal British Legion, parish councils and places of worship extinguished all but one of their lights to mark the occasion.

As part of this remarkable event, 14-18 NOW commissioned four international artists – Bedwyr Williams, Bob and Roberta Smith, Nalini Malani and Ryoji Ikeda – to create public artworks for in Cardiff, Belfast, Edinburgh and London that responded to the idea of a single light continuing to shine through darkness.  The artist Jeremy Deller designed a free-to-download app for the occasion and its four short films were viewed more than 250,000 before they ‘vanished’ at the stroke of 11pm on 4 August 2014.

Visit the microsite to find out more.

The lamps are going out all over Europe; we shall not see them lit again in our lifetime