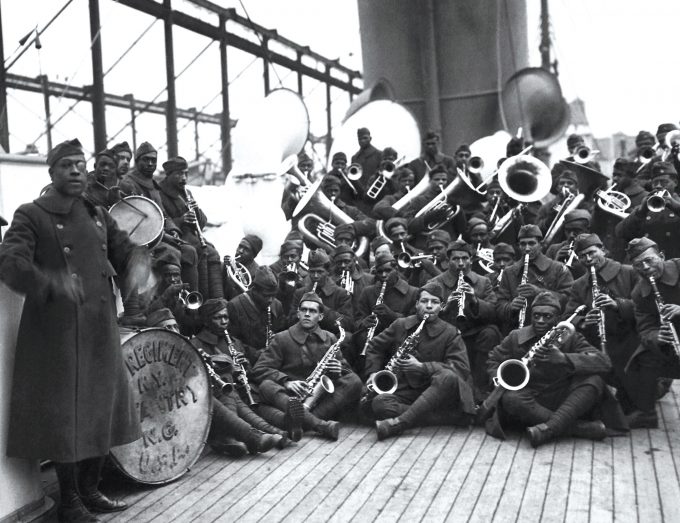 James Reese Europe And The Absence Of Ruin

a rich offering — and a beautiful, poignant, reverent one

On New Year’s Day 1918, James Reese Europe – an iconic figure in the evolution of African-American music – landed in Brest with the Harlem Hellfighters. As well as their achievements in combat, Europe’s crack military music ensemble popularised the new spirit of jazz to a war-torn French nation fascinated with black culture.  And this is but the beginning of a story that continues to fascinate and intrigue.

A century later, composer, pianist and visual artist Jason Moran – himself a major and innovative force in today’s jazz – celebrated the legacy of a hero of black music, in a multi-dimensioned reflection on the impact of the African-American presence in Europe in the closing years of WW1, and its resonance both in Europe and in the USA, with contributions from John Akomfrah, and visual materials from acclaimed cinematographer Bradford Young, in a new project specially commissioned for the final year of 14-18 NOW.  The Harlem Hellfighters story provides the genesis of the extraordinary impact of African-American music on Europe and the Americas, and a century of profound cultural and political change that is still evolving.

The performing ensemble will include members of Moran’s long-established trio, the Bandwagon, and a group of brass and wind players drawn from today’s richly talented new generation of British musicians.  Moran himself has created projects that have offered a profound insight into the creative world of key figures in jazz history, Fats Waller and Thelonious Monk. His most recent UK performances included a two-night residency at Tate Modern with his long-term collaborator, performance artist Joan Jonas, and a duet with fellow pianist Robert Glasper at a sold-out Festival Hall.

Jason Moran – James Reese Europe and the Absence of Ruin was co-commissioned by 14-18 NOW: WW1 Centenary Art Commissions, Berliner Festspiele / Jazzfest Berlin, Serious and the John F. Kennedy Center for Performing Arts, with support from the National Lottery through Arts Council England and the Heritage Lottery Fund, from the Department for Digital, Culture, Media and Sport and from the Federal Agency for Civic Education, Germany.

a rich offering — and a beautiful, poignant, reverent one