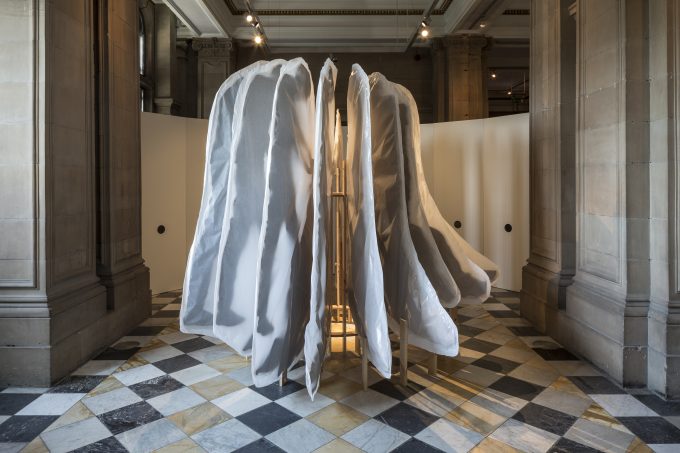 In 1918 and 1919, Glasgow Museums purchased a collection of boxes containing charms and amulets ‘worn by the fighting men in the Great War’. The handwritten title of one of the charms (a Chinese soap-stone monkey) is ‘I say nothing’. These, along with three mule hooves, a moss- filled pillow and a book of French grammar riddled with shrapnel holes, are among the objects to which Christine Borland found herself drawn during her year of research at Glasgow Museums Resource Centre.

Of particular interest to the artist has been a modest white ceramic invalid feeder cup in the museums’ handling collection. The teapot-like object, examples of which were used both to nurse the sick during the war and force-feed hunger-striking suffragettes in the years running up to 1914, speaks of the duality of institutional care and brutality.

Through an expanded focus on this object, Borland explores the potential for a simple object to embody something much more than the reality of its humble form or material. While the stasis of storage – or, indeed, the passing of time – can render historical objects mute, I Say Nothing aims to give them a voice.

Co-commissioned by 14-18 NOW and Glasgow Museums, made possible with Art Fund support