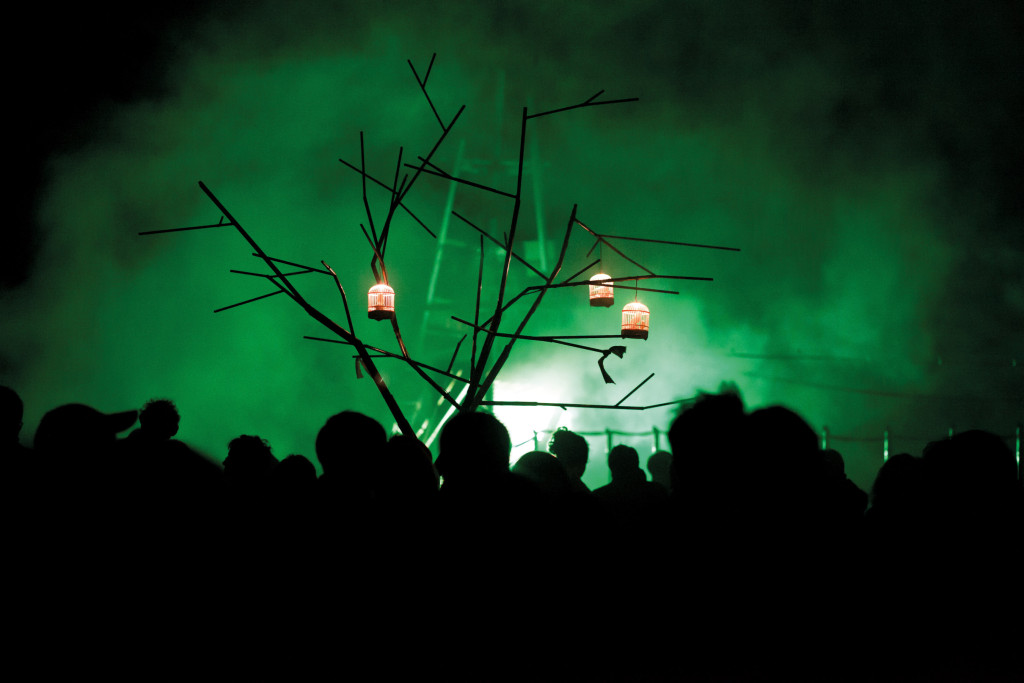 How was it possible to make art amidst the unimaginable horrors of the First World War? What would art look like if it tried to reflect, rather than ignore, the chaos of war? Did art mean anything when millions of men were being cut down by machine guns for the sake of a few yards of territory? Was it possible to believe any more in Western civilisation, when its leaders were sending so many young men out to die?

In Zurich, a group of radical young artists tried to answer these questions. They believed that European society was broken. Rather than support its values, they were determined to expose them as false. Art should no longer concern itself with comforting ideas of beauty; nor should it be restricted to the theatre, to the museum, or to the drawing rooms of the wealthy. Instead art should be everywhere, and it should be rebellious, disruptive, chaotic and political.

The earliest Dada performances took place at the Cabaret Voltaire nightclub in Zurich. They were unruly, aggressive, bizarre: on at least one occasion the audience attacked the stage. But their sense of anger and disenchantment chimed with artists across the western world, and soon new branches of Dada sprang up in Berlin, Paris, New York and elsewhere.

Dada mocked the institutions of Western civilisation. It was anti-establishment, anti-colonialist, anti-war, anti-religion, and even, according to the painter Hans Richter, ‘anti-art’. Indeed, the most famous work to emerge from the movement was Marcel Duchamp’s Fountain (1917), a porcelain urinal submitted to an exhibition in New York to test whether its judges still clung to the old values of art that Dada opposed. It became one of the most influential events in art history. After Dada, art would never be the same.

In Furious Folly, the anti-war song The Deserter by Boris Vian is sung in its original French. The song was written in 1954 during the Indochina War, and specifically around the time of the Battle of Dien Bien Phu, in which the French were decisively beaten by the Viet Minh. He had been a little upset that French singer Marcel Mouloudji (1922-1994), who first performed “Le Déserteur” (The Deserter) in 1954, had not accepted the original lyrics because he thought that it would lead to the song being banned. Though Vian accepted a change to one verse, the song was banned from TVs and radios from 1955 until 1962. On hearing that his song had been banned, Vian said “My song is no antimilitarist song at all, but, I admit, it is violently pro-civilian.” It is also said that the last two verses of the song originally read, “que je serai en arme/et que je sais tirer” (that I’ll be armed/and I know how to shoot) but that it was changed to reflect the pacifist and anti-militarist character of the song.

As no radio could broadcast the song, it soon fell into oblivion and was only rediscovered in 1966 by Peter, Paul and Mary as they took part in the protest song movement. It has been performed by similarly motivated musicians ever since, notably by Joan Baez in her protest against the Vietnam War and by nuclear protesters in Vian’s native France.

The lyrics of the song translated are:

Walter Griffin was imprisoned for various periods from 1917 to 1919 for refusing to serve in the military. He was one of 16,000 men who attempted to register as conscientious objectors during the First World War, as fighting in the armed forces went against their religious, political or moral beliefs. Their cases were assessed at tribunal hearings and ultimately some conscientious objectors were faced with repeated prison sentences..

In a time of wartime patriotic fervour, refusing to serve one’s country was an unpopular and controversial stance to take. Those who refused to fight had to prepare their cases well – whether they were based on religious, political or moral beliefs. A large number of conscientious objectors in Britain were either Christian pacifists, such as Quakers, or socialists who believed that the working man was being used as a tool in a capitalist war.

A conscientious objector also had to deliberate whether they were an absolutist or alternativist objector. Those who were absolutist, such as future Prime Minister Clement Attlee’s brother, Thomas, refused to take any part in the military effort, even in non-combatant roles.  These men often found themselves sentenced to prison after refusing to obey military orders. Alternativist objectors refused to fight, but were prepared to undertake alternative work or serve in a non-combatant role at the front. Around 1,500 people served in the Friends Ambulance Unit, a medical unit established by Quakers, for example.

The First World War set a precedent for the existence of conscientious objectors in times of war. It also inspired some to refuse to fight in the Second World War, due to their experiences during the First. Ralph Partridge was one such example. In a statement to the Appeal Tribunal for Conscientious Objectors in 1943 he said “During the course of that war I had plenty of time to reflect on why I was trying so hard to kill my fellow men… The “war to end war” had degenerated into a war to stave off the next was by punitive peace terms. I resigned my commission as soon as the war ended and became a pacifist.”

Today, a conscientious objector is an ‘individual who has claimed the right to refuse to perform military service’, and is a political right protected by the United Nations through the right to religious freedom in the International Covenant on Civil and Political Rights.

I shall die,
but that is all that I shall do for Death.
I hear him leading his horse out of the stall;
I hear the clatter on the barn-floor.
He is in haste; he has business in Cuba,
business in the Balkans, many calls to make this morning.
But I will not hold the bridle
while he clinches the girth.
And he may mount by himself:
I will not give him a leg up.

I will not tell him the whereabout of my friends
nor of my enemies either.
Though he promise me much,
I will not map him the route to any man’s door.
Am I a spy in the land of the living,
that I should deliver men to Death?
Brother, the password and the plans of our city
are safe with me; never through me Shall you be overcome.

Ali was a conscientious objector due to his religious beliefs – as well as a boxer, he was also a Muslim minister. Ali was sentenced to five years imprisonment for draft evasion during the Vietnam War, a conviction that was later overturned by the Supreme Court after a lengthy three year legal battle.

Austrian Jägerstätter was called up to fight for Nazi Germany in 1940. He reported to the military and underwent basic training, but refused to fight as he was an opponent of the Nazi Party and bearing arms was against his Catholic faith. He wrote:

‘What Catholic can dare to say that these raids which Germany has carried out in several countries, and is still carrying out, constitute a just and holy war?’

After refusing to fight, Jägerstätter was imprisoned in Berlin. Despite several requests to serve in the ambulance division, Franz was tried and sentenced to death for ‘undermining the military forces’. He was executed on 9 August 1943. He was beatified by the Catholic Church in 2007.

Christianity and Resistance in the 20th Century, edited by Søren Dosenrode, Brill Publishing, 2009

Hobhouse was the eldest son born into a wealthy family, but was heavily influenced by the work of Tolstoy. He rejected his family inheritance and joined the Quaker Society of Friends. When he was conscripted in 1916, he took the absolutist stance and so was imprisoned in London. He wrote the pamphlet An English Prison from Within:

‘We objectors to conscription were not conscious of any guilt involved in the act for which we were committed to gaol; on the contrary we were, more or less powerfully, sustained in our endurance by a faith in the righteousness, and, in many cases, in the supremely Christian character of the cause for which we conceived ourselves to be suffering loss of liberty and a measure of persecution.’

Although gas had been used in warfare before the First World War, it was in this war that its development allowed it became a major weapon in battles that could be used on a mass scale.  Tear gas was initially used on a small scale by the French in 1914, but it was only in 1915 that Germans began to use new compounds on a larger scale.  Furious Folly was initially commissioned by the town of Poperinge in Belgium, to mark the centenary of the first use of gas in WW1 by Germany.

With the development of gas as a weapon, came the development of defenses against it. Gas masks became more sophisticated, changing from cotton mouth pads to the canister gas mask that we would recognise today. The other, less iconic, defense was the gas gong. Mark Anderson, the creator of Furious Folly, came across these initially when he was researching the various warning systems for gas. He found that although there were often tools in place for warning soldiers of incoming has attacks, such as pedal gongs and specially created drum-like gongs, they were also often improvised, with soldiers grabbing anything they could find – from shell cases to saucepans.

For him, this seemed a perfect match with his previous work, in which he has used unusual objects to create sound installations and to act as instruments. One such object was saw blade, which he has gone on to use in Furious Folly, not only do they create a haunting sound, but their violent imagery resonates with the piece.

During the First World War, there were over 1.2 million casualties as a result of gas, of which just over 90,000 were deaths. Chemical warfare continues to be a highly effective but highly controversial weapon of war, even today.