Cartoons and World War One

Some of the most powerful and memorable images from the First World War are by cartoonists. Comic artists played a major role in keeping up morale and raising money both during and after the war. There are many different styles of cartoons which were part of people’s everyday lives in their everyday communication, in recruitment and fundraising and in helping keep peoples spirits up.

Cartoonists played a major role in recruitment. One of the most famous images from the war is Alfred Leete’s poster design featuring Lord Kitchener – ‘Your Country Needs You’. This inspired the 1917 image in the US by James Montgomery Flagg, ‘I Want You for the US Army’.

Bert Thomas drew the famous cartoon of a grinning soldier lighting a pipe with the caption “’Arf a mo’ Kaiser!” showing the British Tommy cocking a snook at the fearsome German emperor. The cartoon appeared in the Weekly Dispatch in aid of the paper’s tobacco-for-troops fund which raised around £250,000.

The most famous cartoon of the war was Bruce Bairnsfathers ‘ One of our Minor Wars – Well,  if you knows of a better ‘ole go to it.’ It showed two Tommies stuck in a shell hole while gunfire crackles above and around them. It featured a Midlands Tommy ‘Old Bill’ who went on to appear in other cartoons, books, a play in the West End, comic strips and two films not to speak of hundreds of thousands of pieces of merchandise – cups, plates, etc. which are still to be found in antique fairs today.

Bairnsfather was a serving officer and understood the boredom and the danger faced by men on the front. His cartoons were hugely popular with the men reflecting the many aspects of the reality of life in the trenches– the rain and mud, bad food and other problems. There is even a bus now in the Imperial War Museum named ‘Old Bill’ with the character’s head as a mascot on the bonnet.

Another popular artist was William Heath Robinson whose complicated contraptions entertained and amused the men during their hours of boredom. Many soldiers sent him ideas for cartoons some of which he used. His cartoons did not demonise the Germans but rather showed them as buffoons.

Cartoon strips by artists such as William Haselden made fun of the Kaiser helping people to believe that the German army was beatable and making fun of ‘Big and Little Willie’ – the Kaiser and his son.

Another feature of the war was the many comic postcard designs featuring war time life both on the fighting front and the home front. Some of the designs reflected the importance of fighting for your country and the contribution made by women. Again it helped keep up morale raising a smile amongst those at home and abroad.

Cartoons of the Great War are one of the most evocative and memorable images from the period and give a real sense of how people kept going in the face of deprivation and loss. 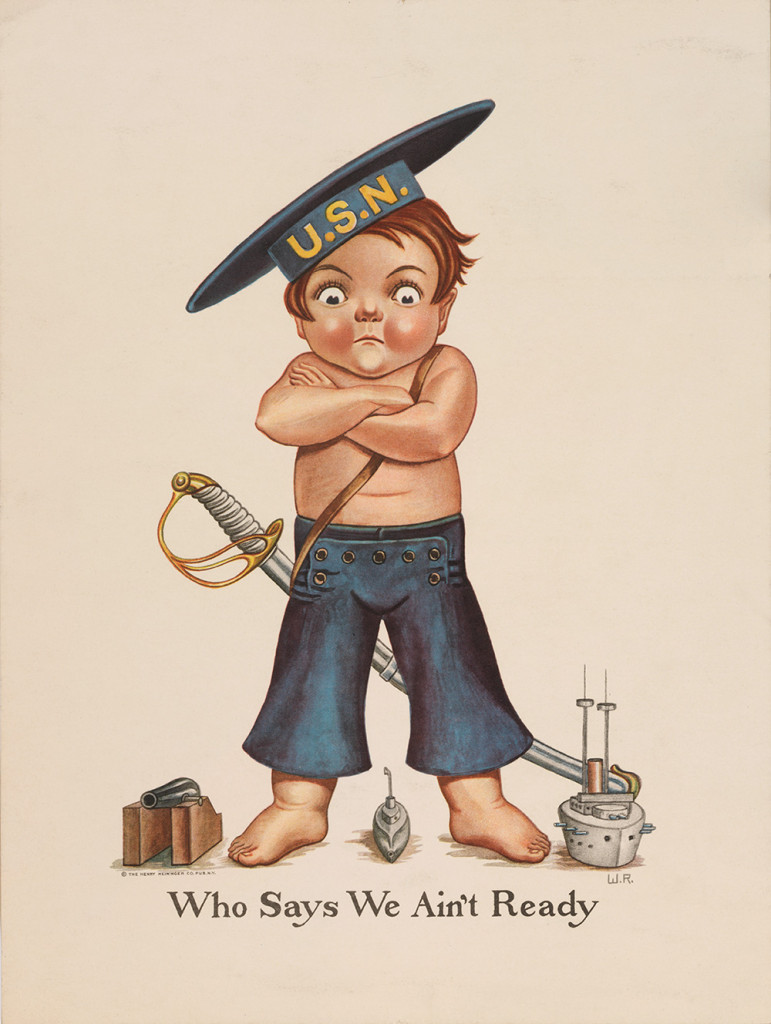 The image fills the whole with text in black positioned underneath. All is set against a plain white background. image: a young boy, shown full-length and facing the viewer, wearing a wide-brimmed naval cap marked “U.S.N.”, a long sword on a shoulder belt and bell- bottomed trousers. His arms are determinedly folded across his bared chest as he stands astride his toy submarine. text: Who Says We Ain’t Ready 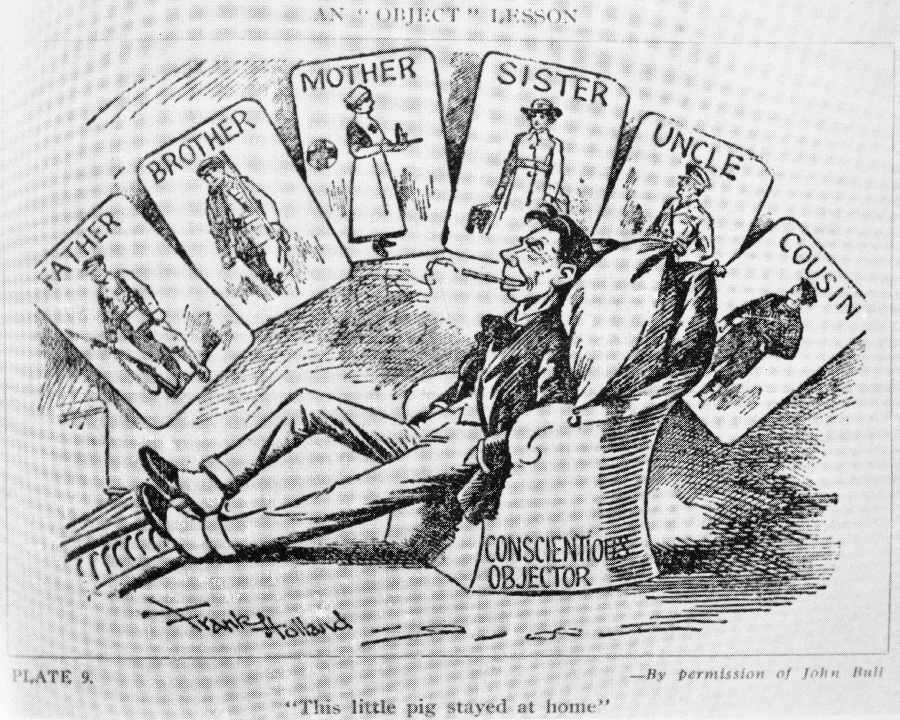 A cartoon from the First World War period by Frank Holland “An Object Lesson: This Little Pig stayed at Home” depicting a lazy conscientious objector who stayed at home while the rest of his family contributes to the war effort. Holland, an artist, worked as a cartoonist for Lord Harmsworth from the 1890s until the First World War. His work appeared in various magazines and newspapers, including the Daily Mail. 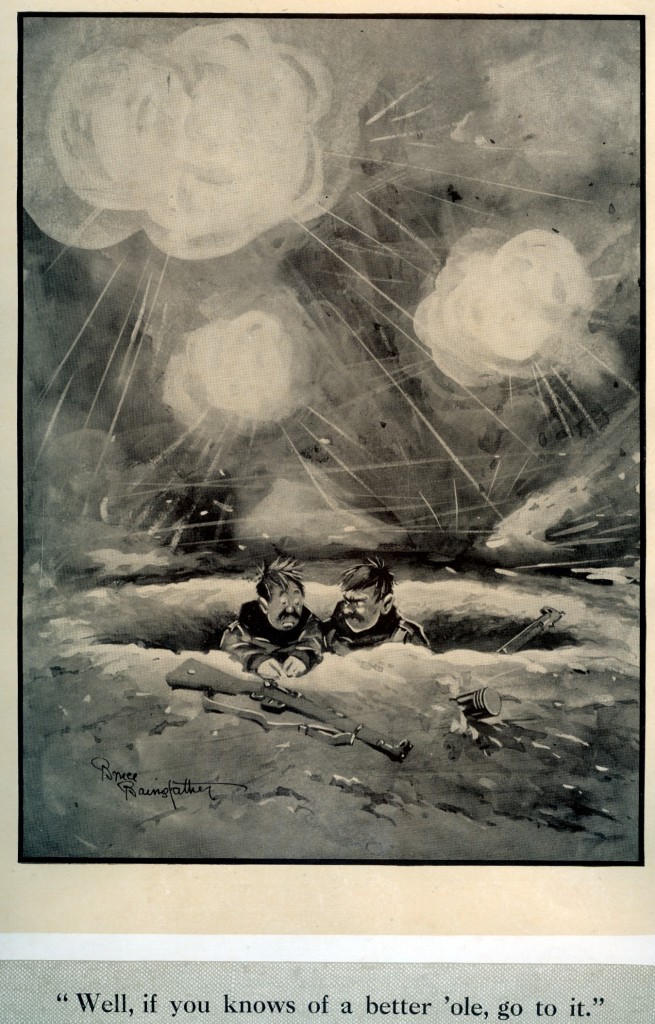 Archduke Franz Ferdinand of Austria and his wife descend the steps of the City Hall, Sarajevo to their motor car, a few moments before their assassination.
© Image IWM

Archduke Franz Ferdinand, heir to the Austro Hungarian Emperor, with his wife Sophie, Duchess of Hohenberg and their three children, Princess Sophie, Maximilian, Duke of Hohenburg and Prince Ernst von Hohenberg. The Archduke had married his wife, a former lady in waiting to Archduchess Isabella in July 1900. Because Sophie’s background was not royal, the marriage was morganatic, and the children excluded from the succession to the Austro Hungarian throne. The assassination of the Archduke and his wife during a state visit to the Bosnian capital, Sarajevo, on 28 June 1914, precipitated the First World War.
Image credit – Austro Hungarian official court photographer, pre-1914 © IWM