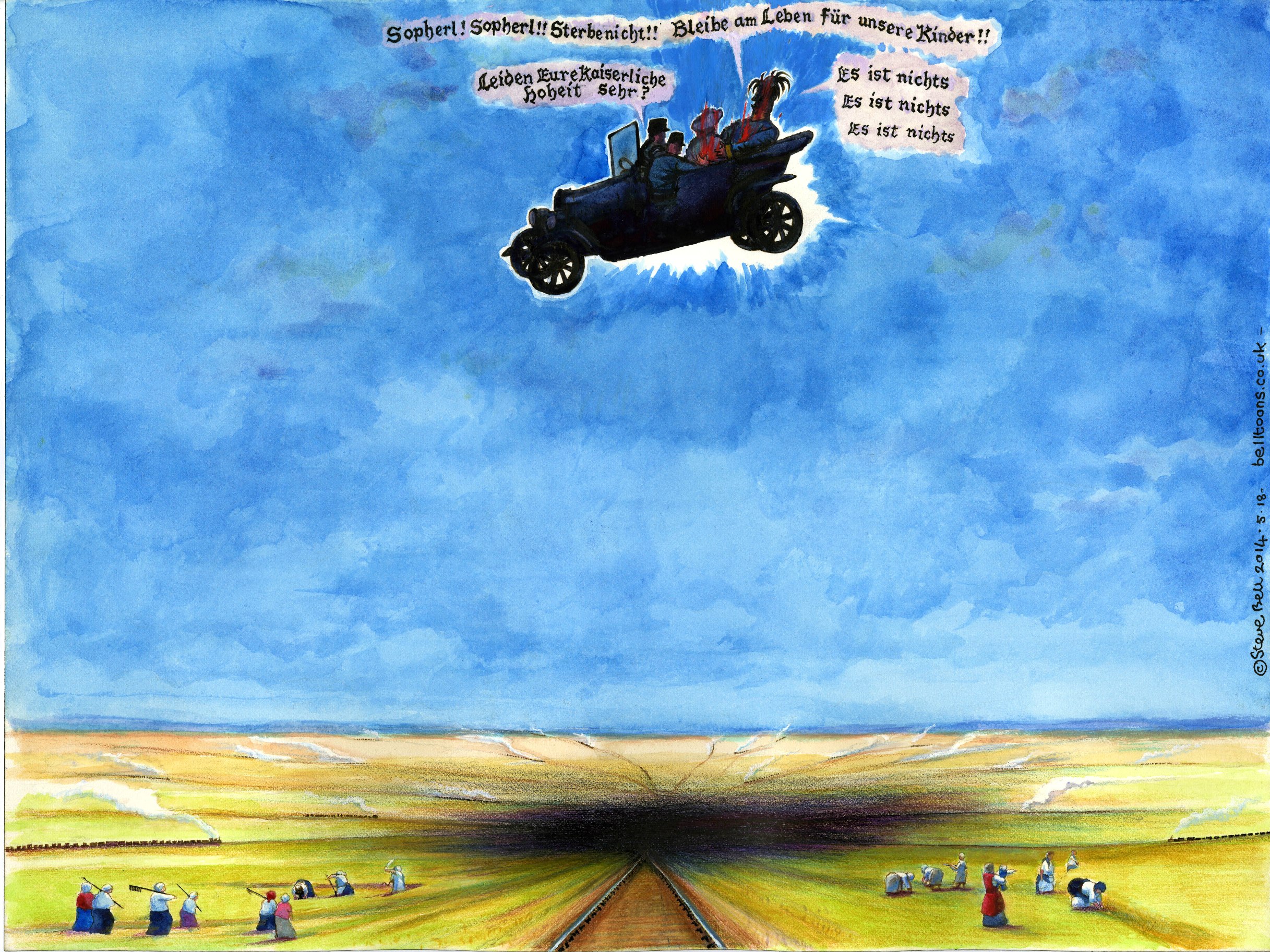 Ink and watercolour on paper

Archduke Franz Ferdinand, heir to the throne of Austria-Hungary, is visiting Sarajevo. It’s the final day of his trip to Bosnia. There have been complaints about lax security… He and his wife Sophie get into their open touring car. Serbia is still furious about Austria-Hungary’s annexation of Bosnia… Among the crowds along the route are six armed men, among them a thin intense 19 year old called Gavrilo Princip. The imperial visit has been in the news for months – enough time to smuggle weapons across the border from Serbia.

The first attempt on the Archduke comes at 10.15 as his car goes along the riverside… His advisers urge him to leave Sarajevo at once but he insists on going to see his injured aide at the hospital. The car sets off back along the riverside, but the chauffeur turns into the wrong street. The car’s owner, Count von Harach is on the running board… Gunshots ring out, killing both the Archduke and Archduchess… It is just after 11am. Europe’s great crisis has started. 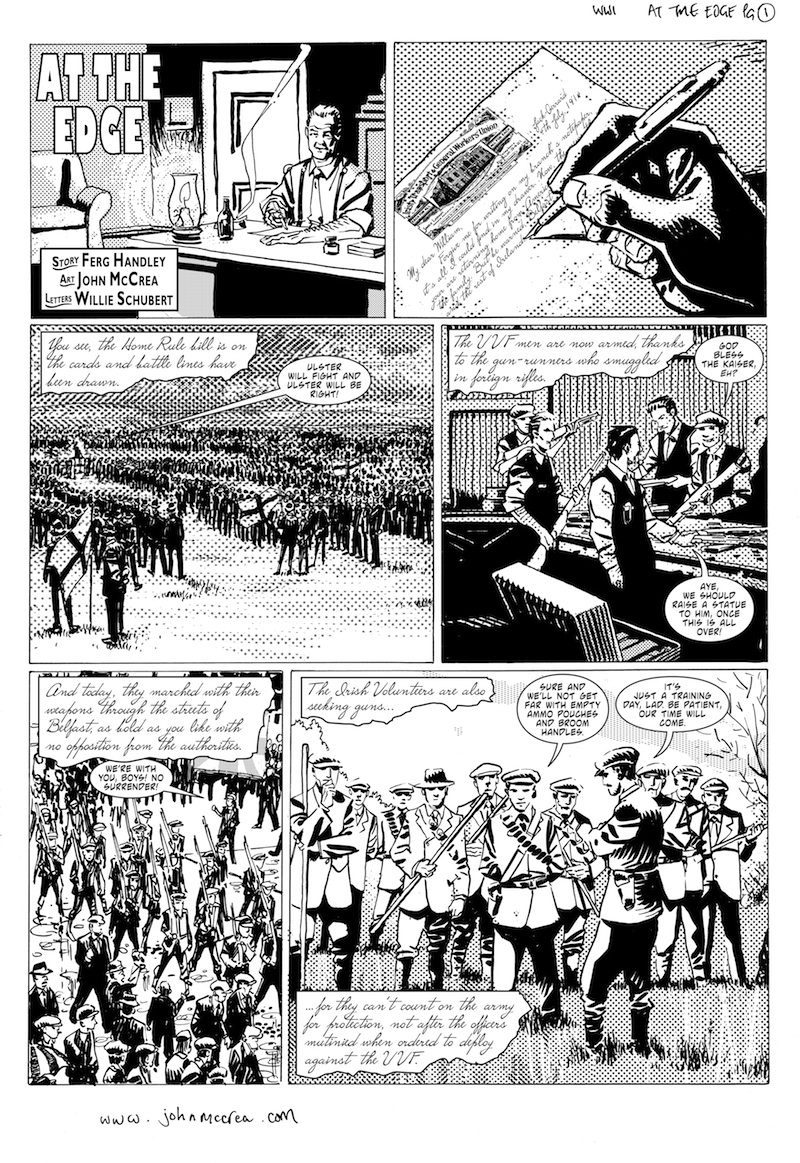 The government is trying to get Home Rule for Ireland through Parliament. Irish nationalists have been campaigning for Ireland to be ruled from Dublin for years. But opposition from the Protestants in Ulster and their supporters in Britain is threatening to derail the process, worse, divide the country… The Protestant Ulster Volunteers are putting on a show of force.

The Daily Express:
‘The West Belfast regiment marched to a stable where the rifles were secreted. Two men climbed into the loft and threw open the upper doors while the volunteers filed into the small cobbled yard from the street. The guns with fixed bayonets were quickly served out. Delight and pride were upon every face when the whole detachment had been supplied.’

The nationalists who want self-government are worried.

The Irish Volunteer newspaper prints a desperate plea:
‘We must have rifles. There is not enough rifles in the country and thousands of trained men are ready for them. We are being taunted with our poverty in being unable to procure sufficient funds to make gun running feasible.’ 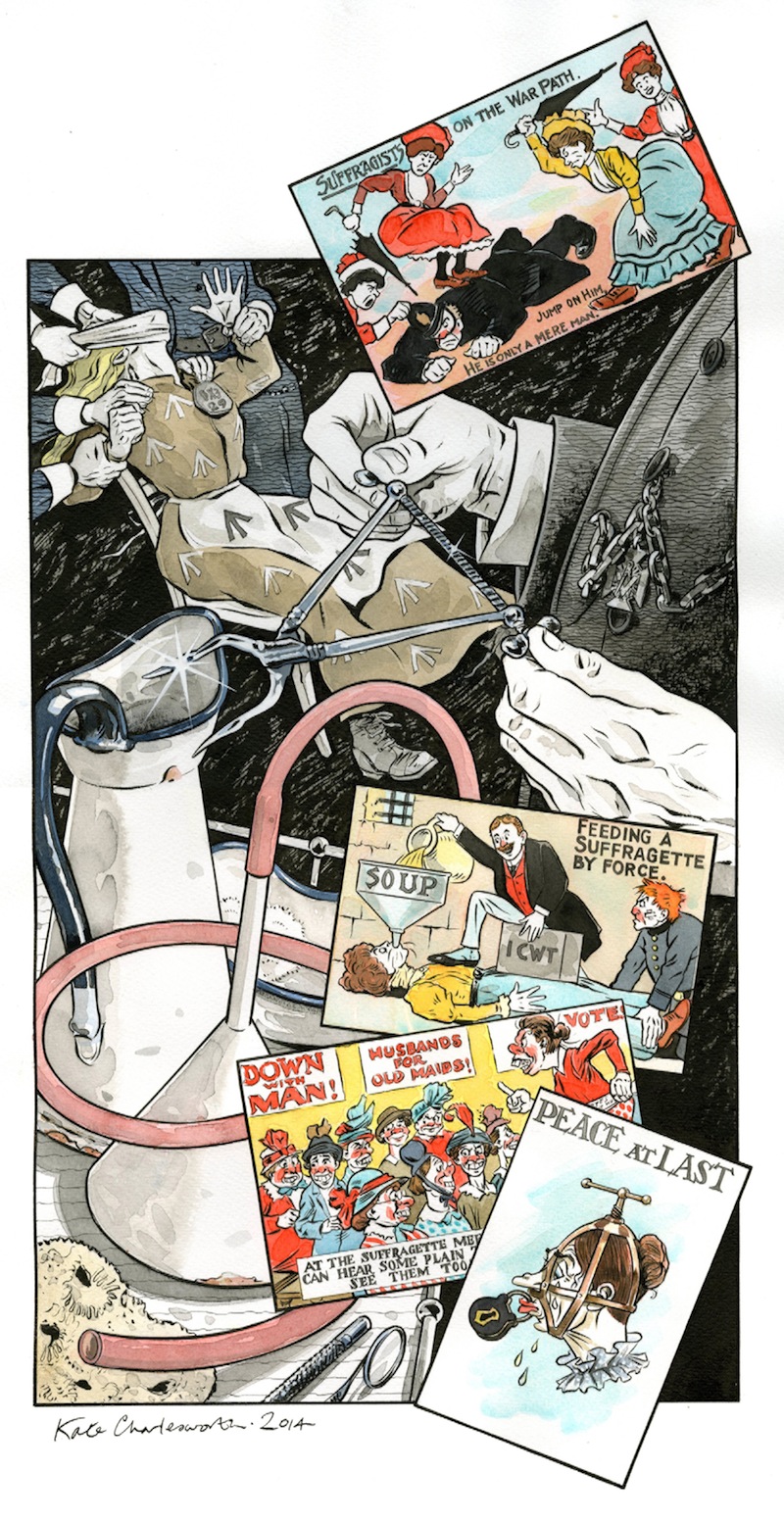 Pen and ink with watercolour

The Bishop of London:
‘I believe the thing is wrong in itself. The process if continued for any times seems to leave them physical and mental wrecks which is incompatible with a Christian civilization to allow.’

The Bishop of London is protesting to the Home Secretary about the force feeding of suffragettes in prison. He’s been speaking to one of the hunger strikers, Mary Richardson:

‘She said she thought that Dr Forword did his best to do it gently, but nothing could prevent the pain of forcing the tube through the nose, especially after it had been done several times and the two jerks with which the tube had to be withdrawn (in order to prevent the tube infecting the lungs) gave terrible discomfort.’

But the Home Secretary, Reginald McKenna is unmoved:
‘My dear Bishop, I have received numerous statements similar to those which you send me, and on inquiry I have always found that they were inaccurate in detail and grossly exaggerated.’ 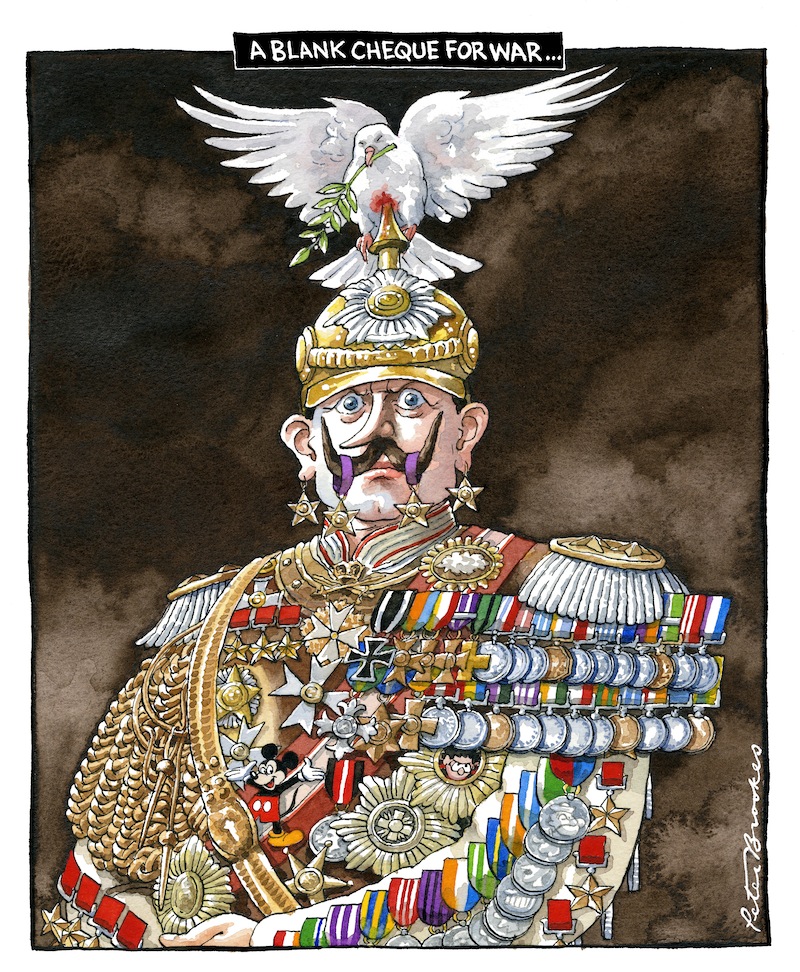 A Blank Cheque for War…

Pen and ink with watercolour on paper

The night train from Vienna pulls into Berlin. A passenger Alexander Hoyos, personal envoy of the Austrian foreign minister Berchtold, is carrying top secret letters for the German government. Austria-Hungary plans to attack Serbia. But will Germany support Vienna even if that brings war with Russia?

Over lunch at the Potsdam palace the Austrian ambassador gives the letter from Vienna to the Kaiser… At first Wilhelm is non-committal. The Ambassador later writes: ‘When I again called attention to the seriousness of the situation, the Kaiser authorised me to inform our gracious majesty that we might in this case as in all others rely upon Germany’s full support.’

This promise is later known as the Kaiser’s ‘blank cheque’… Germany will back its ally no matter what.

With that settled, Wilhelm is off for his usual summer cruise in the North Sea. Before he boards his yacht he tells his friend, the arms manufacturer Gustav Krupp that he is determined to stand firm this time. Germany backed down from confrontation with Russia in the recent Balkan wars ‒ and his beloved soldiers were muttering about Wilhelm the Timid. 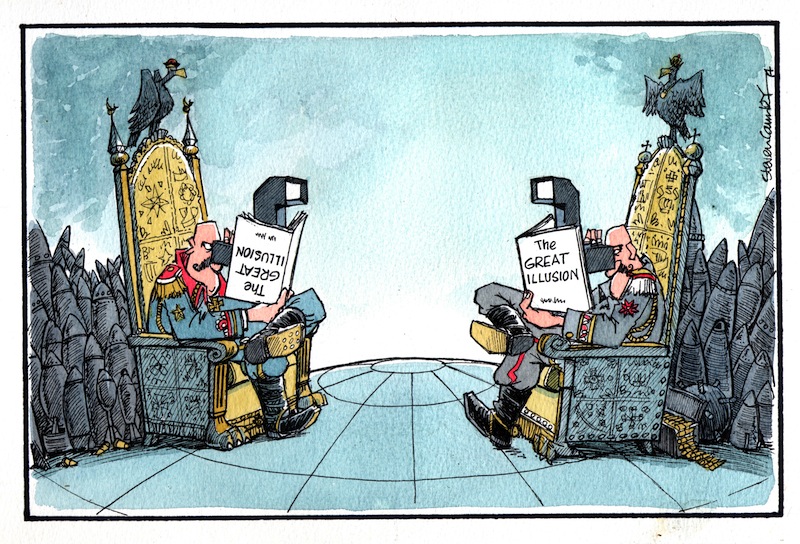 The Kaiser: ‘This time I shall not give in.’

Ink and watercolour on paper

In another part of London, the leading journalist Norman Angell is hopeful that the fashion for militarism will pass: ‘European society might have been transformed in the last 50 years if all the emotion, passion and heroism, the conscription and training and drilling that had gone to war organisation had gone to social organisation.’

His best-selling book The Great Illusion argues that war between the great powers makes no economic sense ‒ they would all lose out. It has become influential among British liberals. The invited audience includes the Chancellor of the Exchequer David Lloyd George, the Labour Party leader Ramsay MacDonald and playwright George Bernard Shaw.

Angell:
‘If we are to duplicate indefinitely international history as men have so far written it, all our own national labours will one day go up in the smoke of some grand military bonfire as they have done in the past. The younger generation are increasingly determined not to be the victims of that supreme futility.’

He’s over optimistic. There are those in Europe ‒ quite a few ‒ who find peace dull and even think that a war might be good for society. And necessary to defend a nation’s honour. 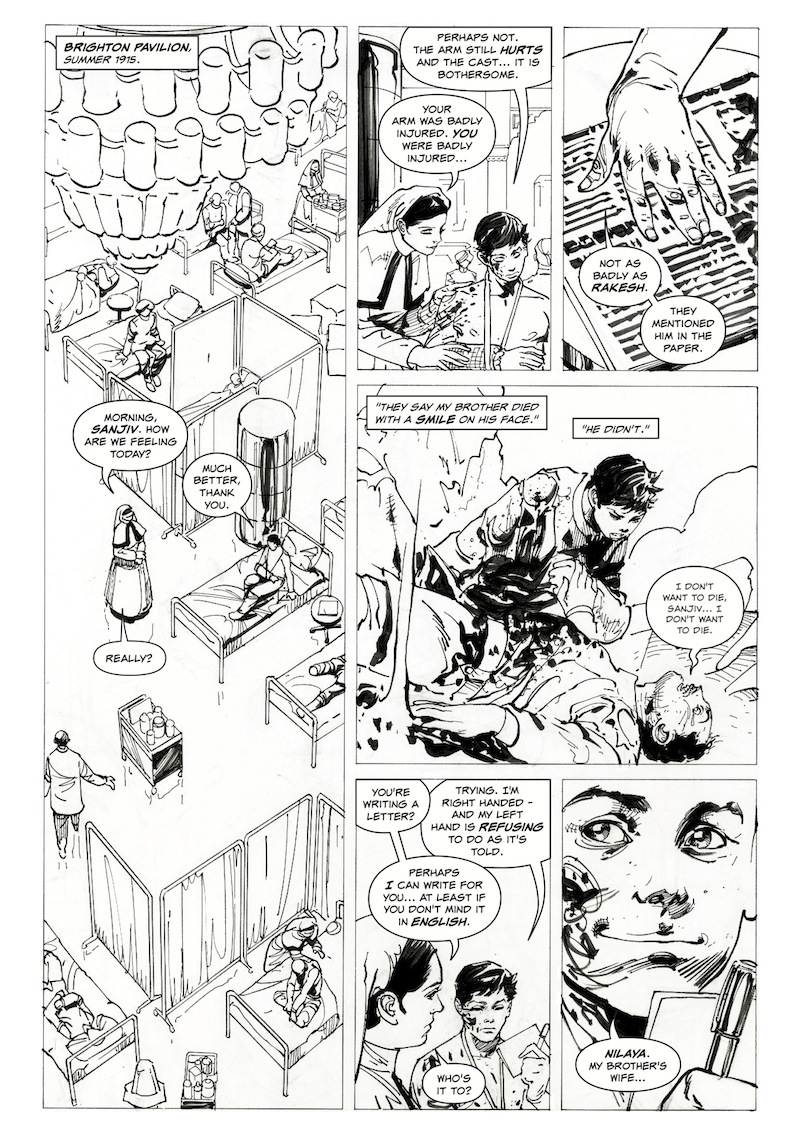 Pen and ink on paper, prints

In Britain, news from the Empire gets as much attention as affairs in Europe. The Times reports the words of a young Indian lawyer:

Gandhi:
‘I am leaving South Africa, but not my connection with this land.’

Mohandas Gandhi is setting sail from Cape Town. He has been campaigning for rights for Indians in South Africa for over 20 years. It has given him the chance to develop his philosophy and techniques of passive resistance. He is proud of his achievements but there are still things to be done.

‘The settlement is the Magna Carta of Indians’ liberty in South Africa. It confirms the theory of the British Constitution that there should not be legal racial inequality between different subjects of the crown.’ 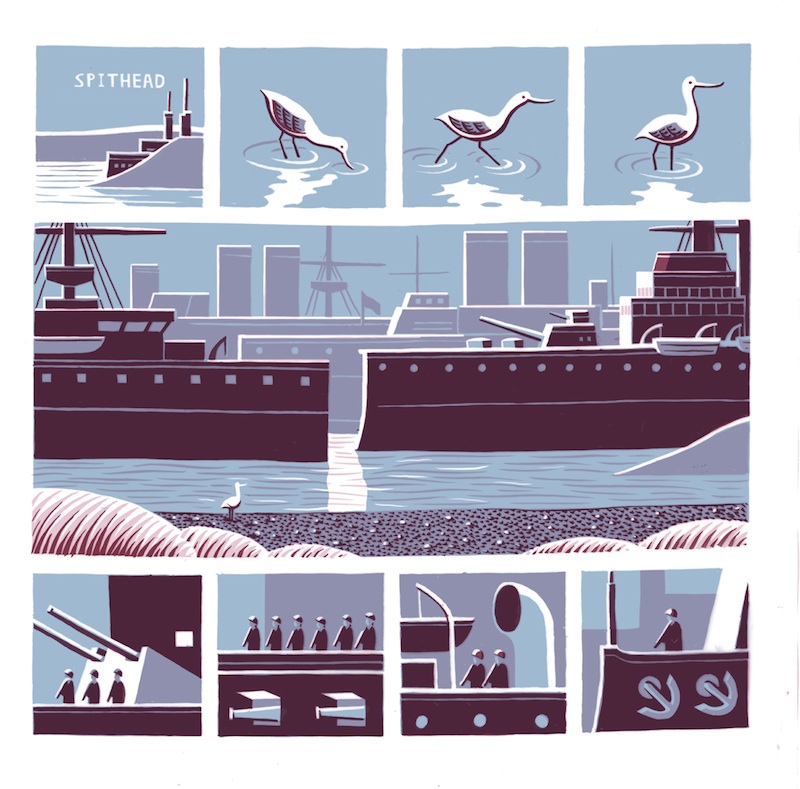 Ink and pencil on paper, print

The British navy gathers at Portsmouth for review by the King. Eleven lines of warships – 60 battleships, 4 battle cruisers, 26 armoured cruisers and a host of destroyers, minelayers, and submarines…

The Royal navy is what makes Britain the world’s greatest power. It protects the Empire and British trade and keeps the British Isles safe from invasion…The journalists are suitably patriotic:

‘It was a spectacle such as no man living has ever seen before, this sea march past of the mobilized war strength of Britain. From end to end of the visible waters stretched the great procession of men-of-war, all the latest ideas in killing and all the old ones that still have some power to slay, all that in the hour of need would put out to sea to defend the flag.’

[The First Lord of the Admiralty, Winston Churchill is at his home in Pear Tree cottage at Overstrand, playing with his children on the beach. He is less hopeful that diplomacy will work yet again. Without consulting Cabinet, he telephones an order to delay the usual dispersal of the Fleet after its summer manoeuvres.]